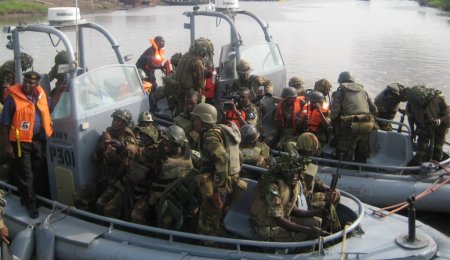 The residents who spoke with Punch explained that the soldiers who besieged their area in five gunboats around 9:20am also invaded another community in the Warri South-West Council Area of Delta State.

Punch correspondents gathered that the operatives, who were searching for militants in the region, allegedly broke into some homes, in search of their targets.

It was also learnt that the raid on Oporoza, which is the haven of runaway ex-militant leader, Tompolo, might not be unconnected with the renewed attacks on oil facilities around Batan area of the council.

The troops’ invasion of the area forced scores of residents to flee and take cover in the bush.

The troops left for another neighbouring community, Tebijor, and carried out a similar operation, when they could not arrest any of their targets at Oporoza.

A Gbaramatu leader and National Coordinator, Center for Peace and Environmental Justice, Sheriff Mulade, confirmed the incident when contacted on phone on Saturday.

Mulade said that many of the people who fled into the bush for cover including women and children had not been seen as of 3:45pm on Saturday.

He explained that the incident had been reported to the military authorities, but called on the Federal Government to halt incessant harassment of his kinsmen because many of them were already traumatised and in pains.

Another resident, who refused to be quoted, said he witnessed the invasion of the soldiers.

He said the troops entered the area from Ugborodo, an Itsekiri community, thereby heightening fears among his people that the operatives might not be Nigerian soldiers.