The proposed 2016 budget currently being subjected to legislative scrutiny by both chambers of the National Assembly is the first budget to be so put together by the APC led administration. The appropriation bill is coming on the heels of global economic downturn which has significantly impacted the Nigerian economy coupled with pockets of significant home-grown difficulties.

The budget is geared towards bridging infrastructure deficit, stimulating the economy and promoting inclusive growth including the poor and the vulnerable. However, the funding of the budget is challenged by declining price of oil which has put massive pressure on commodity prices dependent nations including Nigeria.

Indeed, the 2016 budget is expansionist with a total sum of N6.08tr, an increase of about N1tr from the revised allocation of N5.09tr for 2015. The FG will fund the budget with N820bn, N1.45tr and N1.51tr from oil related, non-oil and independent revenues respectively aggregating to N3.85tr.

As a result of shortfall in revenue particularly that of the oil segment, the proposed budget has a deficit of N2.2tr but the sum of N900bn and N980bn will be borrowed internationally and domestically respectively. Noteworthy to point out is the N1.8tr to be borrowed; representing 30% of the budget will absolutely be used to execute capital projects. No kobo of the borrowed funds will be used to settle salaries and allowances.

This budget deficit represents 2.16% of our GDP which is estimated to be about $521bn. Our national debt to GDP ratio remains one of the lowest not only in Africa but in the world. In an attempt to ensure that our debts do not constitute a serious burden on our national purse in the nearest future, the Federal Government has resolved to service debt to the tune of N1.47tr in the 2016 fiscal year. 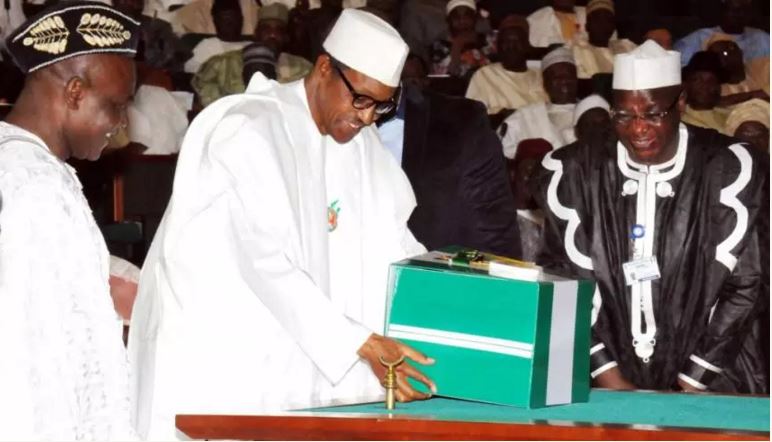 This administration recognizes how far behind we are as a nation in different areas of national development. Regrettably, successive governments have failed to develop Nigeria infrastructurally. The government of the day, in a show of its commitment to build roads, boost power generation and invest remarkably in infrastructural projects allocated the total sum of N1.8tr to capital expenditure representing 223% year on year increase in capital spending.

You will agree with me that travelling by road in Nigeria has become a serious nightmare. Road networks across the country are in deplorable state. Existing roads are neither maintained nor rehabilitated while newly awarded roads are hardly completed. In addition, our power sector has been in a state of neglect over the years across supply chain and affordable housing has become almost impossible for the Nigerian people. Therefore, the Federal Government allocated N433.4bn to the Federal Ministry of Works, Power and Housing for the execution of capital projects only.

In addition, our sovereign nation cannot boast of a national carrier let alone state-of-the-art airport in this 21st century neither do we have an efficient railway system in our country. Against this backdrop, the Federal Government allocated N202bn to the Federal Ministry of Transportation for the implementation of capital projects in the 2016 fiscal year alone.

A lot of pundits have said that the government did not walk its talk of Nigerian’s economy diversification by voting N498.4bn and N18.6bn to the Ministries of Interior and Solid Minerals respectively for instance. The logic is that, the Ministry of Interior accommodates Nigerian Immigration Service, Prison Service, Fire Service, Police Force et cetera but the Ministry of Solid Minerals and Steel Development can be compared to the Nigerian National Petroleum Corporation (NNPC) which the government is currently working assiduously to make more transparent, efficient and possibly reduce Joint Venture cash calls obligations.

The Ministry of Solid Minerals is less staffed and all the government is trying to achieve is reform the sector, partner with states and boost investor confidence in investing into exploration and exploitation of solid minerals in Nigeria. It has been globally proven that government has no business in doing business. Government is only expected to create an enabling environment for businesses to thrive and tax commensurately; an established fact this government is committed to achieving.

A commendable item in the 2016 budget is the government’s allocation of N500bn to social intervention programs to assist the poor and vulnerable in our midst in order to ensure an inclusive society. This amount will be used to execute conditional cash transfers to be implemented in phases, school feeding programme, recruitment of 500,000 teachers, financial training and loans to market women, traders and artisans through cooperative societies all of which will be done in partnership with state governments.

Upon weathering the 2008-2009 global economic recession headwind, the balanced sheets of several financial and corporate institutions in Nigeria had been badly affected. The government at the time set up Asset Management Corporation of Nigeria (AMCON) to bail-out a few but sadly, the corporation currently has a record of about N5tr debt.

In view of the above, the Buhari-led administration deemed it important to set up a special intervention programme to be funded to the tune of N500bn to help the poor, less privileged, the vulnerable and indeed the Nigeria people at large.

It is very important to note that two good heads are better than one. One of the most important constitutional roles of the National Assembly is budget review and timely passage for a particular fiscal year.

The budget has been put together by the executive and passed on to the National Assembly- an independent arm of government made up of distinguished senators and honorable members representing their senatorial zones and constituencies across the federation.

The 2016 appropriation bill is not cast in stone. It has been laid before both chambers for their careful consideration and I believe that in the end, when the bill becomes a law, we would have an appropriation Act that will be acceptable to every objective Nigerian.

However, the government of the day do not have penchant for squandamania; therefore, there will be transparency and accountability- the hallmarks of this administration and the budget; no doubt, would be religiously and satisfactorily implemented to the letter.