A group under the aegis of Okela Kach’Idoma has threatened to invoke the gods of the land, ‘Alekwu’ on anyone behind the prosecution of their son and former minister of Interior, Abba Moro. 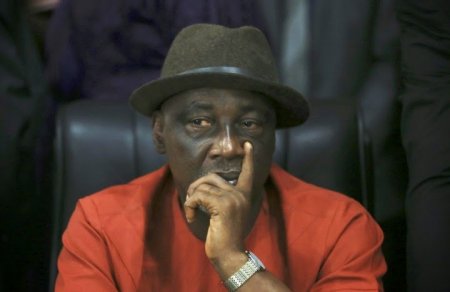 Moro is currently facing trial alongside three others on an 11-count charge bordering on procurement fraud and money laundering over the failed 2014 Nigerian Immigration Service recruitment exercise.

The group said the prosecution was politically motivated just to rubbish the image of the son, Moro.

Addressing newsmen Thursday in Otukpo, the national president of Okela Kach’Idoma, Gabriel Adejor Ogidi, said the people of the Idoma community were not happy with the way Moro was being rubbished in the media.

Accroding to Ogidi, Moro, who is happily married with children, would not set out to organize any exercise that would lead to the death of other people’s children.

The group also faulted the earlier claim by the Comptroller-General of Immigration and Principal Witness (PW1) to the Economic and Financial Crimes Commission (EFCC), Mr. David Paradang that he was not a member of the Steering Committee which conducted the ill-fated recruitment exercise.

“How is that possible? Paradang was in charge of Immigration during the recruitment exercise and as such he cannot deny knowledge of the entire process.

“Now the truth is out. It has been discovered that the former Immigration Boss was actually a Member of the Steering Committee which conducted the ill-fated recruitment exercise. Who is lying now?

“The truth is that he is being used to pull Moro down. The whole drama is staged just to tarnish the image of our son and we will not hesitate invoke the wrath of Alekwu K’Idoma on anyone trying to persecute Comrade Moro,” Ogidi said.

He called on President Muhammadu Buhari not to allow his good image and that of his administration, which he had built for years to be rubbished by some persons he tagged enemies of progress.

Politics EFCC To Close Case In Trial Of Moro, Others – Leadership Newspaper