Organized labour has hailed state governors that “promptly pay” monthly salaries of workers and pensions of retirees as it charges defaulting governors to put an end to what it calls “crisis of workers’ compensation” in their respective states.

Comrade Issa Aremu, General Secretary, Textile Workers’ Union and member NEC of NLC in a statement in Kaduna at the weekend commended the renewed energy of NLC leadership to ensure public employees in states are paid as at when due.

Alhaji Abdulfatah Ahmed of Kwara and 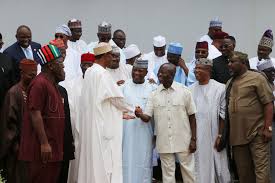 According to the labour leader “the greatest assets of states are their employees” saying governors can only demand for discipline and improved productivity from their employees if their workforce are well motivated.

Aremu observed that nothing including declining oil revenue could justify delayed or non-payment of workers’ salaries adding that payments of salaries and pension are legitimate entitlements and mark of corporate responsibility of any employer and urged governors to reorder their resources in such a way that labour is seen as a critical factor of development before anything else. “Who ever employs must pay the working man or woman as at when due” he said. He likened non-payment of salaries to what he called “economicide”, which he describes as “a systemic destruction of lives of workers on account of lack of means of livelihood adding that many workers have died due to non-payment of salaries that were never adequate even when promptly paid”.