The controversial Radio Biafra, the mouthpiece of the proscribed Indigenous People of Biafra (IPOB), reportedly hit the airwaves about 6am-7am on Sunday morning.

According to Independent Newspaper report, the radio immediately announced the sack of Nnamdi Kanu, as director and leader of IPOB.

The newspaper reported that the Radio Biafra’s programme started with the lady announcer, who gave her name as Ifeoma Okorafor, stating that the radio was back on air and that IPOB was restructuring. 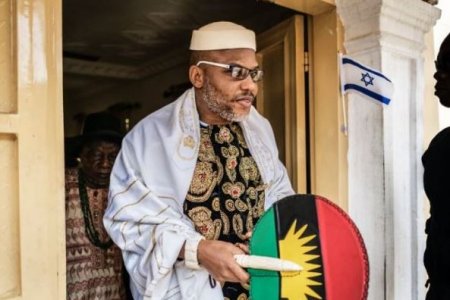 The announcer reeled out reasons why Kanu was removed to include:

“Personalisation of the Biafran struggle and derailing from the core objectives of IPOB as a grassroots movement.

“Kanu’s actions and his decisions to incite members of IPOB towards violence leading to the death of many innocent young people in Onitsha, Aba and Umuahia is totally unacceptable and grossly irresponsible.

“Kanu privately collected £14 million and another $22 million to purchase landed properties abroad in his name and that of his father, Igwe Israel Kanu, in a clear case of ‘monkey dey work baboon dey chop’, among others.