'No Future for Muslim Brotherhood in My Presidential Term'- Sisi

Egyptian ex-military Chief and presidential candidate Abdel-Fattah al-Sisi has said that there would be no future for the Islamist Muslim Brotherhood if he wins in the upcoming presidential elections.

"There will be nothing called the #MuslimBrotherhood in my presidential term,’’ he said while being asked if voting for him means the end of the group.

The comments were the clearest indication of the groups proposed eradication from the army-backed authorities although the group has been sharply attacked since last July.

The Islamist movement, from which ousted president Mohamed Morsi hailed, is currently blacklisted by the interim leadership as a terrorist organisation.

Morsi was removed by Sisi's army last July in response to mass protests against his one-year rule.

"It is the Egyptian people who ended the Muslim Brotherhood,’’ he said in the interview on Monday night on two Egyptian privately-owned TV channels.

The 59-year-old Sisi is expected to win in the May 26 to 27 presidential polls, in which leftist Hamdeen Sabahi would be his solo opponent.

"Such an ideology cannot be seen in Egypt again,’’ Sisi told the two interviewers, adding that the violent confrontations adopted by the group since Morsi's ouster showed "political stupidity".

Sisi is considered a saviour and a national hero by most Egyptians due to the army's actions against Islamist supporters. He resigned from the military in late March to run for the president.

Meanwhile, the ex-military chief also reassured that the military will not rule Egypt if he is elected president.

The Arab most populous country has been under the rule of military strongman Hosni Mubarak for nearly three decades. Mubarak was toppled in early 2011 by nationwide protests.

The army's mission would be restricted to safeguarding the country and if possible, helping in social development, Sisi said, adding that he will not involve the army in politics if he wins.

Sisi denied that he ever thought about the presidential post before removing Morsi on July 3 last year.

"I would not respect myself if July 3 was a plan I made to seize power in Egypt,’’ he commented, revealing that he made his decision to run for president in late February based on popular demands.

Considering the new protest law that prevents demonstrations without prior security permission, Sisi said that the dangers and challenges facing the country were too serious to criticise such a law. Some youth activists who supported Sisi while removing Morsi, including founder of April 6 Youth Movement, had recently been sentenced to three years in prison for protesting against the new protest law.

The activities of the youth movement have also been banned by a recent court order.

During the interview, Sisi revealed that he discovered two assassination attempts that targeted him since Morsi's removal.

He said that a Brotherhood leading figure threatened him a week before Morsi's ouster that the group will be supported by militants from #Syria, #Libya and #Afghanistan if the army removed Morsi.

Speaking of his presidential program, Sisi said that restoring security and stability were his top priority.

"My program is a realisable dream,’’ Sisi told the two interviewers. 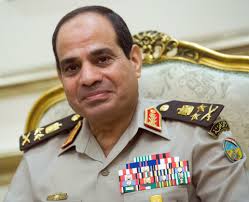