Curators
Godwin Obaseki, governor of Edo state, has accused Adams Oshiomhole, national chairman of the All Progressives Congress (APC), of acting with impunity.

Speaking when he hosted ex-President Goodluck Jonathan at his residence in Benin city, the state capital, Obaseki said the former president knows the importance of protocol unlike Oshiomhole “who disregards protocol anytime he visits the state”.

“It is really sad that someone who has been governor of the state is visiting the state and does not realise that courtesy demands he should inform the incumbent governor or other government apparatus of his visit,” he said 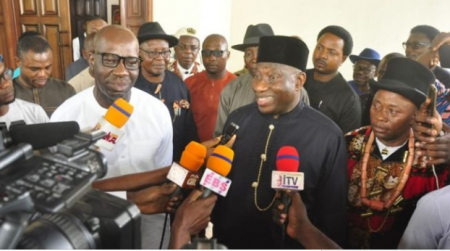 K
Politics OBASEKI OPENS UP: How I fell out with Oshiomhole, Edo APC leaders – Vanguard News