The paramount ruler and Obi of Onitsha in Anambra State, Igwe Alfred Achebe, has condemned the widespread protests by the Indigenous People of Biafra (IPOB), who are calling for the separation of the entire south-east region from Nigeria.

The condemnation came on the heels of agitations and protests for Biafra nation across parts of the country, especially as the protesters clamoured for the release of the Director of Radio Biafra, Nnamdi Kanu, who had been in detention since October.

Speaking in an interview shortly after his inauguration as the Chancellor of Ahmadu Bello University, Zaria, Igwe Achebe told the protesters to shelve the idea of secession from the rest of Nigeria. 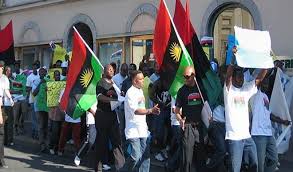 He said that such agitation would only amount to violating the constitution of the country and the principles of democracy.

The traditional ruler reminded the pro Biafra agitators of the inherent dangers involved in their action, emphasising that Nigeria remained a united and indivisible country irrespective of the numerous challenges.

He urged them to channel all their grievances to their elected representatives in the National Assembly for consideration, rather than embarking on violent protests that could result into breakdown of law and order in the region.