Traditional rulers in Ondo State have banned the Igbo traditional title of Eze Ndigbo in all towns and villages in the state. 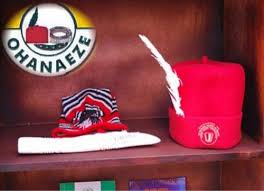 The Deji of Akure, Oba Aladelusi Aladetoyinbo announced the resolution of the traditional rulers in the state through a statement issued by his Chief Press Secretary, Mr. Michael Adeyeye.

He declared that the title of Eze Ndigbo no longer exist in the state.

He said all the traditional rulers in the state had agreed to ensure that the title of Eze Ndigbo is banned in all their domains.

It was gathered that the Deji of Akure planned to install a new Eze Ndigbo against the wish of many Igbos in the state but the Akure monarch said ” for the benefit of doubt, we have no intention to install any leader for the Igbo community as being speculated. “

The Akure monarch said, “The title of Eze Ndigbo does not exist anywhere in Akure or Ondo state. Therefore, there could not have been any move to install anyone with such title. Hence, it remains a figment of the imagination and mere wishful thinking for anyone who claims such.