Metro Ondo Workers Storm Accountant-General’s Office, Drag Him To Bank For Their Salaries

The aggrieved workers, who earlier picketed the A-G office at Alagbaka Akure, the state capital, were being owed six months salaries.

They were led by their Joint Negotiating Council (JNC) Chairman, Mr. Sunday Adeleye and the State Chairman, Mrs. Bosede Daramola and other union leaders.

Adeleye, while speaking with reporters, said the union leaders recently met Governor Olusegun Mimiko and they both resolved that the workers should be paid a month for them to have money to celebrate the Christmas.

He said “about four days ago, we met with the governor and the commissioner for finance and directed the AG to pay the workers salaries so that everybody can go home with something.

“Since then, we have been coming here but he has been avoiding us until today when we asked him when he will pay us but, he said no workers will be paid until after Christmas.

“For your information, this is man that will be retiring from service tomorrow and the system is this, he is the only who has the legal right to pay workers and the moment he retires, it will take government up to three weeks to appointment another AG.

“Let me tell, people are dying. What manner of parent are you, when you cannot buy your child a T-shirt.

“We will continue to keep vigil on this premises until the AG is ready to pay the workers”.

Ajibokun, however, blamed poor banking network for the reason for the delay in the payment.


Below is a photo of the Accountant-General shared by Daily Post: 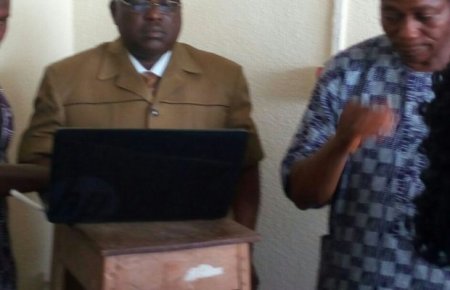 That's very good for him. Imagine a country whereby some workers are being owed 6 months salary. The people I pitied most are the state lecturers of the ondo state because I wonder how they've been coping particularly RUGIPO lecturers in the sense that selling of handouts in that school is prohibited and 98.9% of the lecturers are married men and women. This is really annoying. I pray president Buhari himself will intervene before the situation will be out of control and before the present governor hand over to the elected governor on 4th of February 2017.