We all know what happens in times of adversity. The mask of civility and morality are put on a big test. Those who do not become predators are victimized, if you’re lucky enough to get the support of a few loyalists, the law might eventually be manipulated against you, and the media narratives controlled in a particular run-down manner until you surrender will be deployed to choke you out.

In an attempt to titivate the garb of political correctness, theorists, political analyst, propagandists and fabulist have found one comfortable way to justify lawlessness and why the judiciary must eschew due process in this particular case. 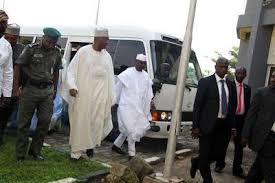 Saraki’s trial at the CCT is indeed a special case in its many corollaries with an unblemished shade of different colours premised on the orders of the power brokers. To spoil the child and spare the rod may have been the lead message but whose personal development is to suffer? And who is/are the instructors dishing out the punishments? And what exactly are the offences for which Saraki in this context is being punished for.

At some point, the supporters of the self acclaimed APC national leader admitted that Saraki’s ‘offence’ was flouting the party’s rule on ‘’power grabbing’’ and allegedly set out some preconditions for peace to reign.

The fact that Bukola Saraki emerged the Chairman of the 8thSenate without the inputs of the ‘godfathers’ endeared him to many as a practice away from the norm that has eaten deep into our polity while the same set of people worked tirelessly to tamper with the justice system with the hope that Saraki may relinquish power. The Senators in the hallowed chamber irked by the constant harassment and lack of regards for pending judgements in a higher court decided to show solidarity and demand for due process in the course of the trial of the Senate Chairman – Abuabakar Bukola Saraki.

They frowned at the way and manner the case is being handled and called for punitive measures after it was clear that a script was being played out by those opposed to Saraki’s ascension to the Senate number one seat.

Not minding the negative report a section of the media might beam their searchlight on to satisfy their sponsors, the Senators were resolute in their mission; consistently, they demonstrated their loyalty to Bukola Saraki at every appearance they made at the Code of Conduct Tribunal thus sending a strong signal to the anti-8th Senate bandwagon on the covalent bonding that exists among the Senators.

One of the familiar tantrums thrown at stifling the honest assessment, and debate, of issues on the real motives behind Saraki’s travail at the CCT was to label the Senators as being ‘’jobless’’ and ‘’selfish’’ for the show of solidarity even when all indications points to the current Senate as the most innovate, conversational, and productive in the last five decades on the account of the various feats achieved in a short while.

It is on record that the 8th Senate elections remains one of the most controversial in history and yet the most productive in terms of activities and successful accomplishments of key deliverable.

The Senators despite party interests have continue to impress many Nigerians on how they have attended to issue of national importance without bickering or ego massaging.

In another move deserving of commendation which further entrench the 8th National Assembly as a model for subsequent Senate, is the successful appointments of Committee Chairmen into various portfolios. The maturity deployed by the Senate to abolish completely the term ‘’juicy committee” (often used to justify a committee position as more rewarding than another) is a sure antidote at increasing performances and ensuring diligence in the discharge of their duties to their constituency and the nation at large.

Bukola Saraki led Senate is not the cesspool in terms of wasteful spending and allegations of corruption as portrayed by a fraction of the media, persistently, the Senate has produced new sets of standard that may not be surpassed in a long time, no cases of bribe taking to screen and confirm nominees or entered a deal with the executive for smooth passage of unfavourable selfish bills, the type that characterised the 7th Senate and its leadership.

If history permits, and the Senators allow national interest override their personal needs, then cutting down on budgetary allocations and drastic reduction in allowances and take home packages will arguably make the Saraki led 8th Senate the best we’ve ever had since independence.

Nneka Okoye is a social media enthusiasts and political analyst