The massive leak of confidential documents described as the Panama Papers has got a lot of politicians and world leaders hot under the collar.

The leak of more than 11.5 million documents from Panama-based law firm Mossack Fonseca—obtained by German newspaper Süddeutsche Zeitung and the International Consortium of Investigative Journalists (ICIJ) and shared with more than 100 other news organizations—is the biggest data leak in history

NigerianBulletin considers seven personalities from Africa who have been caught up in the scandal.

The papers name the nephew of embattled South African President Jacob Zuma, Khulubuse Zuma, as a representative of Caprikat Limited—one of two offshore companies that acquired oilfields in Democratic Republic of Congo in a 100 million rand ($6.8 million) deal in 2010. Caprikat is registered in the British Virgin Islands, the main offshore tax haven involved in the Panama Papers.

2. Kenya: Kalpana Rawal, the country’s second-highest judge Rawal, the Deputy Chief Justice and Deputy President of Kenya’s Supreme Court, has been linked to as many as 11 offshore companies based in the British Virgin Islands by the leak. 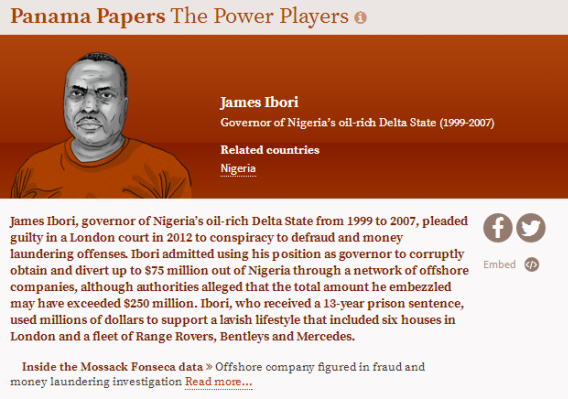 Ibori served as the governor of Nigeria’s Delta state—a center of the West African country’s vital oil and gas industry —between 1999 and 2007. He was convicted in 2012 for fraud, totaling nearly £50 million ($77 million at the time) by a London court.

Ibori was linked to four offshore companies by the Panama Papers link, one of which—named Stanhope Investments—was used to open a Swiss bank account, into which funds were channeled for the purchase of a $20 million private jet.

The twin sibling of Congolese President Joseph Kabila, Jaynet Désirée Kabila Kyungu, has been a member of parliament in the vast Central African country since 2012.

She is linked to Keratsu Holding Limited, a company incorporated in the Pacific island of Niue in June 2001, months before her brother was elected as the president of Democratic Republic of Congo.

José Maria Botelho de Vasconcelos has twice served as Angola’s petroleum minister, between 1999 and 2002 and again from 2008 until present. He also served as president of the Organization of the Petroleum Exporting Countries (OPEC) in 2009.

According to the Panama Papers, Botelho de Vasconcelos was listed as one of two individuals with power of attorney for Medea Investments Limited, which was founded in 2001 in Niue.

Mark was linked to eight active companies registered in the British Virgin Island.