Curators
Cristiano Ronaldo is to have an airport in Madeira named after him following his and Portugal's success at Euro 2016. 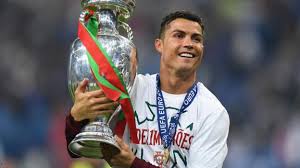 Miguel Albuquerque, the president of Madeira, has confirmed that the island's main airport will be renamed the Madeira Cristiano Ronaldo airport.

The 31-year-old already has a bronze statue, a museum and a hotel named after him in Funchal - his birthplace and the capital of Madeira.

K
Sports Ronaldo Names Who Will Replace Him After Retirement