This morning before heading to the EFCC office in Abuja, Femi OluKayode took to his twitter page to praise the name of the Lord. 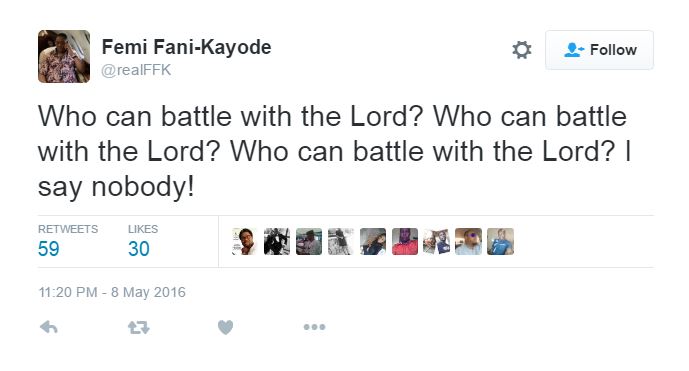 The spokesman of former President, Dr. Goodluck Jonathan’s Campaign Organisation, is to be questioned on N840 million he reportedly received a few days to the presidential election. Fani-Kayode was spotted at about 9.30am at the EFCC office in blue native attire.

Fani-Kayode, who narrowly escaped arrest last Friday when about 10 EFCC operatives stormed his Maitama home in Abuja is to explain why he collected the sum of N840 million and what it was used for.

is the lord asked you to thief? Any dirty appears you should no put lord on it

May 10, 2016
LequteMan
L
M
Politics FFK Reacts To Buhari’s Meeting With Archbishop Of Canterbury In London