Mirror UK has reported that Rafael Benitez has been sacked as manager of Real Madrid.

The former Liverpool and Chelsea boss has endured a tough season at the Bernabeu since taking over in June, and while he only finds his side four points off Atletico at the top of La Liga he has had fallouts with key players and been criticised for a defensive style of football. 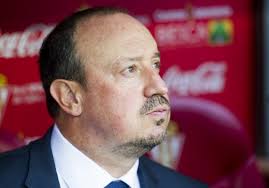 Benitez was also denied the chance for another piece of silverware, the Copa del Rey, after an administrative gaffe saw them expelled for fielding an ineligible player against Cadiz.