Former Presidential aide, Reuben Abati has written a new piece on reactions to his previous article, 'The Man Who Named his Dog Buhari'. 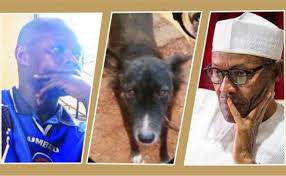 Last Friday, my phones rang again and again (thank God for dead phones gradually playing Lazarus), but what triggered that ring-ring was the article: “The Man Who Named His Dog Buhari” (August 26) in which I had indicated all the positive attributes of a dog and why a man naming his dog Buhari should not generate a community and legal trial or so much stress in the public space. One caller kept me on the phone for close to two hours.

He said he was proceeding right-away to buy a dog and name it Reuben Abati and that he would bring that dog to my neighbourhood, with the name inscribed on both sides of the dog and he would in my presence call out the dog: “Reuben Abati, come and eat, Reuben Abati, stop shouting, Reuben, stop being stupid, Reuben, you this idiotic dog!” and he’d like to see my reaction. I laughed. He said it was not something to be amused about, because although I had argued that a dog is a man’s best friend, and that in other societies, a dog is treated with respect and considered loyal and trustworthy, his view was that I failed to acknowledge the fact that in our culture, to attach the name of a man to an animal is definitely an insult.

His point was that Africans are not cut out for that kind of indulgence, and we have not yet, given our peculiar circumstances of development and culture, attained that stage where animals are given such reverence, or a time when Africans will build hotels for cats and dogs, have sex with dogs, adopt animals as biological children or talk about animal rights. He said in Nigeria, dogs are variously perceived as a taboo, as a dirty animal, as bush meat to quench hunger or as item for rituals. He said a lot of other things.

“You were writing about a dog being so important in Western cultures. You should have told us what a dog is in our own culture and may be that will give you an idea of why Joe Chinakwe’s action should not be treated so lightly?”

He answered his own question.

“What you don’t now is that a dog is a dirty animal in our culture. Even in the Bible, the dog is referred to as something dirty and vile, don’t mind these Oyinbo people now turning a dog into something important. And if you are wondering why Joe Chinakwe’s neighbours want him dead, I need to tell you that in Islam, a dog is like a pig, a taboo. Go and do your investigation, you are not likely to find Muslim families keeping dogs as pets. People use dogs for rituals in Yorubaland to appease Ogun, the god of iron and they eat it afterwards. In the South South, a dog is also a special delicacy for the family soup pot. And have you seen an Ondo man eyeing a dog, and salivating? Special meat. So, if a dog in America is a king, here it is a sacrificial lamb. Should anybody then give the suggestion around here that Buhari is a sacrificial lamb or an edible offering? What nonsense!”

I kept quiet. I wanted him to exhaust his angst.

“The lesson of this whole thing is that people should avoid actions that can cause problems. We are living in a delicate country where people are suspicious of one another. People should learn to watch what they do. That your Chinakwe knew what he was doing. He took a dog, labelled it Buhari on both sides and went to a place occupied mostly by Northerners, and Muslims, and he started parading the dog. Look, he could have been killed. And if he was killed, the next thing we would hear is that Fulani herdsmen have killed an Igbo man and his dog. Nobody will ask for the cause of the violence, or talk about what the Igbo man did. Why should an Igbo man act that way? It is obvious a good number of them don’t like this government, and they have the right not to, but they should not disturb public peace, or try to frustrate this innocent man in Abuja.”

I gave a short speech about human rights and the freedom of choice, and the need to avoid ethnic labeling. He fired back, so loudly I had to move the phone a few inches away:

“Nobody is saying Igbos should support Buhari. But why is it that they are always the ones at the centre of every incident? When they live in your community, they want to take over. They will appoint an Eze Ndigbo, something they will not allow in the East for other ethnic groups, and they will disregard the local monarch. They have taken over a part of Lagos and claimed it as their own, but nobody else can claim any part of Igboland. Who introduced unitary government, but now Igbos are the ones saying they want Nigeria to be restructured. Every trouble in this country, there must be an Igbo hand in it. If that man and his dog had been slaughtered, the whole thing could have degenerated into an ethnic conflict.”

I made some statements about tolerance and why ethnic-labeling is unproductive. I argued that President Goodluck Jonathan was called a goat and that the goat had the name printed on it. He didn’t allow me to land.

“That was bad enough because a goat is regarded as a senseless animal among Igbos, they call it Mkpi. It wasn’t a Northerner that called Jonathan a goat.”

“They said worse things about him,” I interjected.

“But no Northerner went to Jonathan’s household or his community to abuse him to his face. We must talk about our culture not American or European culture. If Chinakwe had named his dog Buhari and kept it within his compound, there would have been no problem, but to carry a placard on the dog and begin to walk around with it, that is provocative. Do we write names on dogs in Nigeria? We don’t. You can call your dog what you like, but don’t behave in a manner that can cause problems.”

“But the police are being mischievous. They are doing eye service. They are chasing the wrong dog.”

“No”, he retorted. “It is their job to enforce law and order and to protect life and property. Your friend’s action posed a threat to what the police stand for. What was he trying to achieve? He deserves to be jailed”

“Because he is Igbo?”

“Because he did something stupid.”

“He is lying. He should know that no Muslim will feel honoured being called a dog. And why is he mentioning the President’s name? A man who says his father is Alhaji Buhari, and he is aggrieved, took him to the police station. It has nothing to do with the President. He should be lucky he is alive. And being Igbo, he also knows that when you call a man Nkita in Igboland, he could take your head off in anger.”

“I stand with him. We are in a democracy. He has the right to call his dog any name he chooses.”

“Yes. But he cannot use the same name to provoke people. He is not being charged for naming a dog, he is being charged for inciting hate and behaving in a manner that could breach the public peace. If he loves President Buhari as he says, why doesn’t he name a child of his after the President? That is how we honour people we admire in African culture. In your article, you were quoting white people, dead and alive, I am quoting my grandmother in the village whose wisdom is more relevant.”

“I still don’t get your point. And I think we are spending too much energy on this naming of a dog and its parade.”

“We should because small things matter a lot, and small things can destroy a country. People should know their environment and behave properly. I want to see that man punished.”

“I don’t want him to be punished. We should aspire to make this country an open and free society.”

“Of course, it is people like you who defend gay rights, abortion and prostitution. One man has just been arrested, again in Ogun State, for stealing 18 tubers of yam (valued at N10, 000) and a bunch of vegetables (worth N50) I won’t be surprised if you argue that he is exercising his right to be free from hunger. Or you may even say- that is stealing and not corruption.”

“I will argue that it is a sign of the times, in the same manner in which the widespread theft of pots of soup in local compounds is a sign of the times, and in fact in the same manner in which Chinakwe’s naming of his dog is a poignant political statement. When the people are hungry, angry, helpless and afraid, they will resort to codes, actions, symbols and metaphors to reflect their sorry condition and frustration. For your information, the man who stole yam and vegetables is insisting that he is not guilty! He is 30 years old and he has been remanded in prison custody.”

“Good for him. We are waging a war against indiscipline and corruption.”

Long after the conversation with this fellow, who by the way is a government official in Abuja, I came to the same conclusion that Nigeria is at a tethering edge. We are not yet a nation. We are divided by ethnicity, culture, and religion and the walls of division are so strong, only a little push could pull down those walls. This situation places us far away from the currents of democratic leadership and limits our ability to balance primordial culture with new realities and the people’s aspirations. We are at a crossroads of belief, unbelief and faithlessness.

I had thought or read that it was Joe Chinakwe (whose name keeps changing curiously in various reports - Joe, Joseph, Joachim, Iroko- but no matter, he is at best a working metaphor) who had put dog Buhari to death, but it turns out that the dog was actually killed by aggrieved Northerners in Chinakwe’s community. Chinakwe’s dog is yet another Nigerian metaphor: a metaphor of extant fault-lines. That Igbo dog-owner must watch his back. If he gets roughly handled like his dog, the same policemen who have been so busy trying to punish him are likely to do nothing since in their view, he brought it all upon himself.