Curators
Nigeria’s U-23 team coach, Samson Siasia, has appointed Chelsea midfielder, Mikel Obi, as captain of the team for the Rio 2016 Olympic Games. 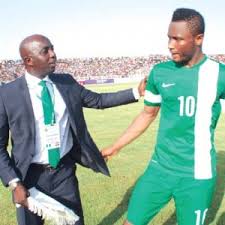 Nigeria, who are seeking their second Olympic gold, will begin their campaign in Group B against Japan on August 4. Mikel took over from Azubuike Okechukwu who captained the team at the Senegal 2015 U-23 African Cup of Nations.

Siasia said the choice of Mikel was automatic as he was the captain of the Super Eagles and Team Nigeria to the Games.

He said, “After meeting with both of them and explaining my position, I am pleased to say Azubuike, who has been our captain, understood and was happy to hand over the captain’s band to Mikel. It is a thing of joy for my team to produce the first footballer to captain Team Nigeria to the Olympics. This, to me, is more than gratifying.”