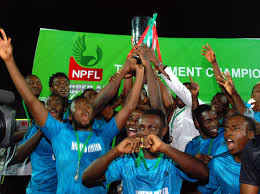 The Port Harcourt-side won the trophy with 6-points and three goals after winning two matches out of three matches it played in the tournament.

Rangers FC came second with 5-points and three goals after winning its first match and playing draw in the two other matches. Wikki Tourist FC of Bauchi came third with 4-points after winning a match, drawing one and losing another.

FC IfeanyiUbah, who forced Rangers FC to a 1 – 1 draw and spoiled the celebration of Rangers’ fans, trailed behind with one point it got from its match with Rangers. It lost two other matches.

The News Agency of Nigeria (NAN) reports that some fanatical Rangers’ fans wanted to beat up some Fly Antelope players if not for intervention of security personnel at the stadium.