Wife of the Zimbabwean president, Grace Mugabe has said that President Robert Mugabe will rule Zimbabwe until he is 100 years old and, if need be, a special wheelchair will be designed for the veteran leader who now struggles to walk and has battled with swollen ankles for years.

Mugabe has been in power since independence in 1980. He turns 92 next February and his Zanu PF party has already nominated him as its presidential candidate for the 2018 elections when he will be 94.

Recent stumbles at Harare international airport as well as during a foreign trip to India have drawn opposition calls for him to step down and allow a younger and more energetic leader to take over. 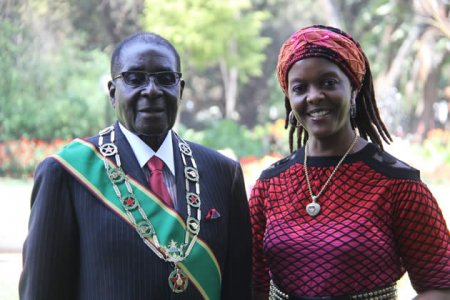 "We are going to create a special wheelchair for President Mugabe until he rules to 100 years because that is what we want.

"That is the people's choice. We want a leader that respects us," said Grace.

She however, admitted that divisions in Zanu PF remained the main threat to her husband staying in power for life.

"Do not be deceived. Do not be short-sighted," she said.

"Leaders come from God. It will not work now or in the future. Let's be well mannered people. You should listen to me now.

"Therefore, let's pray to God for many more years for President Mugabe. We say no to factionalism.

She added that Zanu PF should not be like the opposition MDC, which is "tearing itself apart".

"The MDC is tearing itself apart; instead of taking advantage of that we are following what they are doing.

"You notice that its leader (Morgan Tsvangirai) seems to have lost his brains by calling for sanctions in order for him to become President."

"We have President Mugabe who is a 1000 horse power and he will not allow that. We have a President who does not fear anything.

World Mugabe’s tractors, trucks to be auctioned to pay off debts – News24

‘We Only Endorsed Mugabe as Candidate Out of Fear’ – AllAfrica News: Zimbabwe