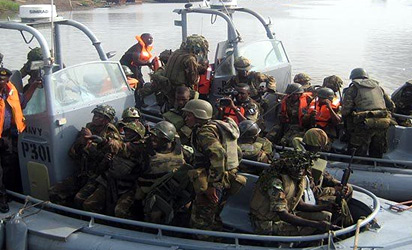 The residents were asleep when they came, but many scampered into the bush when heard the sound of the gunboats. The soldiers, who quickly cordoned the community, embarked on a house to house search.

“I am looking at the soldiers from a hideout in the bush, they are going from house to house. We know their tactics, so we ran away when they landed this morning at the jetty in the town, belonging to Tompolo’s father,” an informant told Vanguard on phone at abot 5.30am.

It was gathered that Tompolo’s father was not in Kurutie when soldiers stormed the town this morning, but an over 70-year-old man, simply identified as Do Good Ikekama, is among the citizens allegedly molested and forced to take the soldiers around some homes.

Ijaw leader, Chief Godspower Gbenekama, who spoke to Vanguard at about 6.00 am, confirmed the siege to Kurutie. He said that despite‎ the appeal by the Gbaramatu monarch, HRM Oboro Gbaraun II, to the Coordinator of the Presidential Amnesty Programme, Brigadier General Paul Boroh (retd) that the soldiers should be professional in their duties, they were still harassing people.

However, the soldiers, according to reports, left the community at about 6.30am ‎.