About five members of the Indigenous People of Biafra (IPOB) were reportedly killed in Onitsha on Thursday while celebrating the release of their leader, Nnamdi Kanu.

According to TheCable, a witness, Festus Uyanna, told journalists that the incident occurred as the jubilant group proceeded toward the Bridge Head and were halted by the military joint task force stationed in the hotspot. Uyanna said the insistence of the IPOB members to converge on the Dim Chukwuemeka Ojukwu gate-way resulted to sporadic shooting during which the task force overpowered them.

“Trouble started when the IPOB members were asked to stop their march toward the Bridge Head, but the group bluntly refused,” he said. 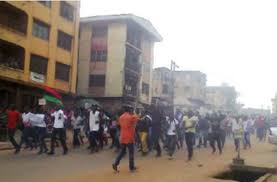 “It was at this juncture that the soldiers started shooting sporadically to scare the crowd.” Also speaking, the coordinator of Campaign for Democracy in the south-east, a pressure group, Uzor Uzor, said he rushed some injured IPOB members to the hospital.

He said: “I have been here since I heard of the shooting. They were unarmed and wanted to converge at the Dim Chukwuemeka Ojukwu Gate-way when they were asked to turn back but they refused. “As I am talking to you, five of them are lying dead in various hospitals and we have been following up about 15 others in critical conditions.” The development resulted to traffic gridlock on major roads in Onitsha while commercial activities were grinded to a halt.