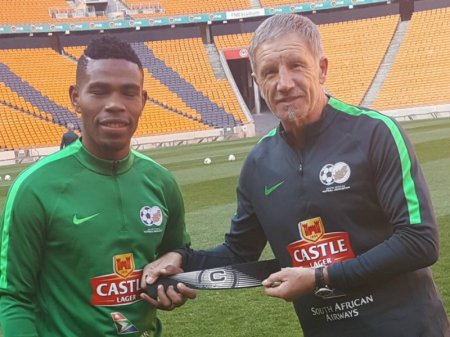 Coach of the South Africa national team Stuart Baxter has replaced Itumeleng Khune as the captain of the team ahead of their AFCON 2019 Qualifiers against Nigeria in Uyo on Saturday.

Hlatshwayo earned the nickname Tyson due to his uncompromising way of ‎defending especially his bravery in tackles and aerial duels right from his days as a youth international for South Africa.

Shortly after naming Hlatshwayo as captain Baxter boast that his wards will give the Nigerians a tough time during this weekend game in Uyo. The coach said they have done their homework on the Nigerian team and perfected their own game plan.

“We need a positive result in Nigeria and we have capabilities to hurt them,” he said. “When we get there, we should be ready. There is no perfect world but I have positive belief.

“We are going to be a big nuisance to them; we want to be a nightmare they don’t want. I respect Nigeria but we are not going there to make up the numbers”, Baxter said.
Last edited: Jun 6, 2017