Controversial South African Pastor, Penuel Mnguni of the End Times Disciples Ministries in Soshanguve, Pretoria, on Sunday visited Nigerian cleric, TB Joshua at his church, Synagogue Church of all Nations in Nigeria and explained why he had fed his congregants live snakes.

Mnguni made headlines in 2015 after feeding his congregants live snakes, live rats, underwear and their own hair. He also put one of them in a freezer for more than 30 minutes, trampled and jumped on them, drove a car over them, and placed big speakers on them. He also rode on one of his members as if he was on a horse. 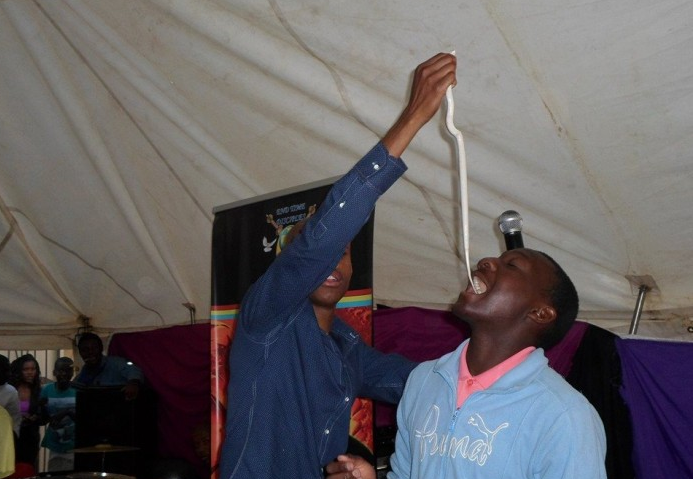 His demonstrations landed him in hot water with the SPCA, which ended up opening a case against him. He was arrested, and later released.

Speaking to TB Joshua at his church, Mnguni, who described himself as an “overseer” of his church, said he had misinterpreted the Bible and did what he thought was scriptural at the time.

It was after watching TB Joshua on TV that realised what he was doing was wrong. He said he went to Nigeria to seek deliverance from the prophet.

He said: “My name is pastor Penuel Mnguni from South Africa, a general overseer of End Time Disciples Ministry based in South Africa. I am known as ‘snake pastor’. I’m popularly known as the ‘snakes pastor’ due to the demonstration that took place in my ministry when I gave live snakes to my congregants to eat.

“After my message, I demonstrated and I gave them snakes, live snakes, to eat. After that, the media all over the world, all the newspapers in South Africa, even outside the country, they were running after me, following me everywhere, even the government was attacking me.

“SPCA opened a case against me, I was arrested then I was released. I came to realise that what I was doing was not written in the bible.

TB Joshua also confirmed this via his twitter handle:

The bible says my people who shall call by my name, and humble themselves and change from their wickedness, then i will come in and fellowship with them. Thank God he has decided to change, but its his old congegration i worry about. I really wonder what churches this days are turning into. Only God will help us
D