South East Senators, who recently visited President Muhammadu Buhari presented a list of demands as a condition for supporting the $29.9 billion external loan being sought by the President through the National Assembly, NASS.

The proposals, according ti Vanguard include:

1. poor state of infrastructure in the South East geopolitical zone,

2. security and accommodation of the zone’s interest in the proposed loan,

3. detention of leader of Independent People of Biafra, IPOB, Mr. Nnamdi Kanu and

4. construction of a rail Standard Gauge Spur from Agbor to Onitsha, 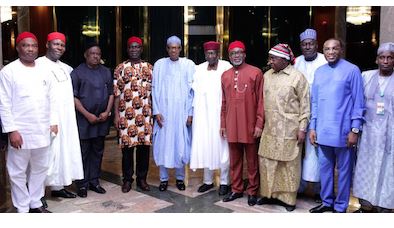 5. request to address the issues of kidnapping, herdsmen and IPOB,

6. the establishment of a dry port in Abia State, Onitsha and Enugu,

7. request for a place in the National Security Council,

8. the inclusion of South East when concessioning federal roads and airports

9. construction of extra River Basin Development Authority for the zone.

The delegation which was led by Deputy Senate President, Sen Ike Ekweremadu and Sen Eyinnaya Abaribe had said that the marginalisation of the South East largely informed their visit.

Feb 19, 2022
Kayode Israel
K
K
Politics It will amount to self-deceit for anyone to say that President Muhammadu Buhari and APC do not mean well for South East – Stella Oduah – LIB