Real Madrid beat Barcelona 2-0 at the Bernabeu to win the Spanish Super Cup 5-1 on aggregate.

The Spanish and European champions were impressive, even thought main main Ronaldo was suspended.

Marco Asensio, who also scored in the 3-1 first-leg win, gave them an early lead with a fantastic 25-yard strike.

Real eased off in the second half, with the cup practically wrapped up, and Barca improved slightly as a result, with Lionel Messi and Luis Suarez hitting the woodwork. 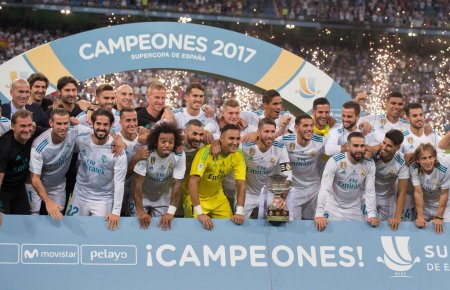 @ese who is to blame for this loss? And please don't mention Neymar.
E

@Samguine weldone ohh - when arsenal and burnley demolihed you, you were AWOL
M

ese said:
@Samguine weldone ohh - when arsenal and burnley demolihed you, you were AWOL
Click to expand...

They didn't. 9 men against 11 and we still got two goals. Put some respeck on it please.

A 20 year Ascensio with a Madrid B team beat your first team home and away. Now that's something