A teenager has been arrested following reports a man was allegedly raped in a Manchester shopping centre.

According to Independent, security staff detained the 19-year-old on Friday over the apparent attack in the Arndale centre’s branch of Next.

Police were called to the scene shortly after 11:30am over claims that a man in his fifties had been raped in the toilets of the busy department store.

The teenager was arrested on suspicion of rape and was taken into custody where he is currently being questioning by detectives. 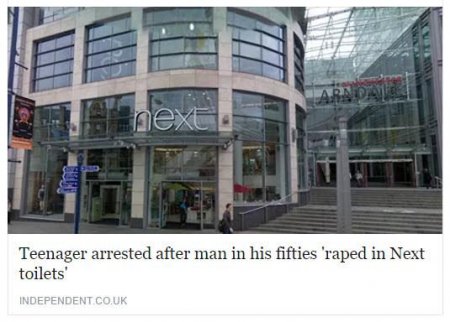 The alleged victim is currently receiving support from specialist officers.

Greater Manchester Police (GMP) chiefs have described the alleged rape as “shocking” but thanked staff for their swift response.

Chris Maddocks, the Detective Sergeant for GMP’s Serious Sexual Crimes Unit, said: “This was an incredibly shocking incident which happened in a busy store today.