Metro Tension In Kaduna As Shi'ites Protest Killing Of Their Members

Tension is currently on in Kaduna as members of the Islamic Movement of Nigeria are said to have embarked on a protest over the arrest and detention of their leader, Sheikh Ibraheem El Zakzaky.

Channels Television reported that the protest is currently going on in Tudun Wada and Kawo areas in the state capital. 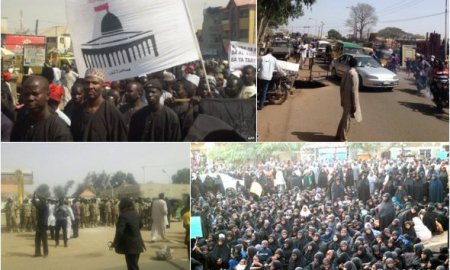 The situation has forced traders and offices to close their shops.

Also, Kaduna State Polytechnic which is very close to Tudun Wada has also locked up.

Security forces were seen patrolling the entire city to prevent a breakdown of law and order.
J

Why would they go on protest? It is the evil preaching they preach against the unity of nation that is turning against them. Let them stop that protest with immediate effect
P

@justice uloko of the Federal High Court has delivered judgement