A suspected armed robbery and kidnap gang, who specialised in raping female victims and kidnapping of rich lawyers as well reverend fathers who keep church money in Enugu, Imo and Abia states, has been smashed by the operatives of the Inspector General of Police Intelligence Response Team(IRT).

A source revealed that the public complaints on the incessant kidnap and robbing of residents in the three states with impunity made the IGP to direct the commander of IRT, a Deputy Commissioner of Police, DCP Abba Kyari, to smash the gang.

When Abba kyari’s special squad swung into action, 16 members of the notorious kidnapping gang, who unleashed terror on residents of these states, were arrested like fowls.

The source also revealed that during the week, five cars and 10 mobile phones belonging to different persons, kidnapped by members of this gang as well as one Ak47 rifle, one pump action gun, five locally made pistols and cartridges, were recovered from the suspects. 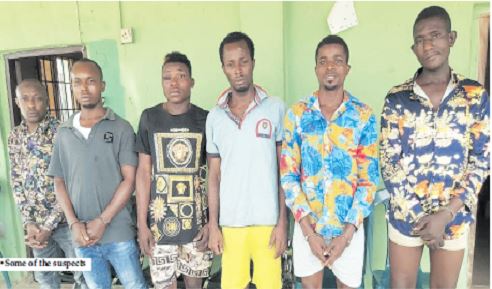