Metro Throwback: PHOTO of Ojukwu as He Declares Biafra Independence in 1967

Curators
As today marks the 50th Anniversary of the end of the Biafra War in Nigeria, below is a throwback photo of the leader of the breakaway Republic of Biafra, Colonel Odumegwu Emeka Ojukwu popularly known as 'Ikemba' reading a speech as he declared the independence of Biafra on May 30th, 1967.

Following the declaration, in July 1967, the head of Nigeria’s military government, General Yakubu Gowon kicked against this and his reaction resulted in a civil war which lasted for 30 months.

After three years of non-stop fighting, in fear of being assassinated, General Odumegwu-Ojukwu in 1970 handed over power to his second in command, Major-General Philip Effiong and traveled to Ivory

In 1982, the Federal Government of Nigeria under President Shehu Aliyu Usman Shagari granted an official pardon to Odumegwu-Ojukwu and opened the road for a triumphant return for him.

He contested as a presidential candidate three times under his party, All Progressives Grand Alliance (APGA) but lost. Until his illness, he remained the party leader. 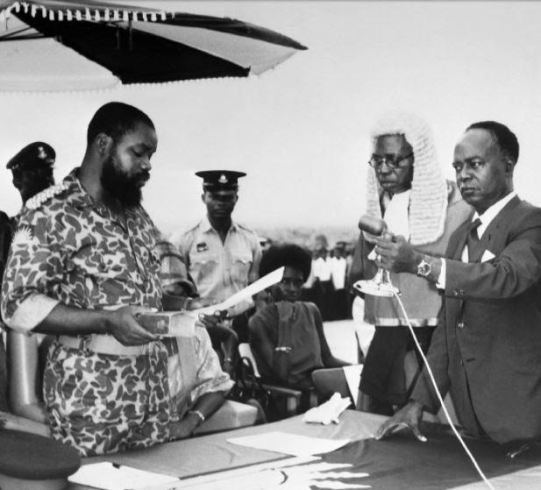 Politics Ojukwu Interview (1): The first coup and his battle for one Nigeria – Vanguard