The factions in the senate are not backing down just yet and on Tuesday, their disagreements blew into the open once again.

It started from the senate plenary when Sen. Kabir Marafa (Zamfara Central) raised a point of order. He demanded just as he had done last week, that the senate committees be reconstituted because the way they were composed violated the standing orders of the senate.

Marafa was however ruled out of order once again by senate president Bukola Saraki who directed him to Order 53(6) of the Senate rules which provides that reference shall not be made to any matter that had already been concluded. 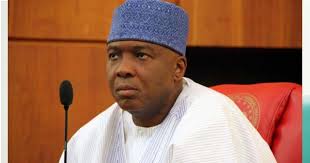 But he was ruled out of order by Saraki after referring Marafa to Order 53(6) of the Senate rules which provides that reference shall not be made to any matter that had already been concluded.

Having been ruled out of order, Marafa walked out of the chamber to brief the press on his grievances but he was followed to the chamber by Wakili who was vehement to stop him from briefing the press.

The move led to hot exchange between them resulting in both of them dragging each other’s attires. Below are the details of the episode excerpt from ThisDay:

Wakili: You have come here to disgrace the Senate again. Is this what you want to do for the next four years?

Marafa: I will, I will. Because I am not working for you.

Wakili: You cannot sit down there and fight against the Senate.

Marafa: I am representing Nigeria and representing my people. And let me tell you, even the nonsense thing they are saying about suspension, nobody can suspend a senator.

Marafa: Let us talk about issues.

Wakili: I have discussed all these your issues in today’s Mirror.

Marafa: Mirror, which kind Mirror? Let us do it (address journalists).

Marafa: Who, my own?

Marafa: Ku samun Mirror (Get me National Mirror). I will respond to it. We raised issues. And we give orders (rules) and point of constitution order.

Wakili: That is not what your constituency sent you here (to do).

Marafa: Are you one of them?

Wakili: We are talking of poverty, education. You are wasting your energy here on useless point of order. I am warning you.

Marafa: It is not useless. You can’t say that order is useless.

Wakili: I will go to your constituency and see what you have done there.

Marafa: Go back. I will go to your own. I was in politics before you when you were wearing uniform

(At this point, the both of them started dragging each other’s attire at this point).

Wakili: Gentlemen of the press, there are issues bedevilling this country…. (Marafa interrupts him).

Marafa: Even if you are not God-fearing, because they made you chairman, a bloody newcomer chairman of a committee. That is why you are talking this way. I am not doing anybody’s game plan. I am speaking the minds of Nigerians.

Wakili: Come, you are a storm in the Senate teacup and a gadfly.

Marafa: I told you I was in politics when you were wearing uniform (still dragging Wakili’s attire).

Wakili: Leave me, look at it. That is not the issue. How old are you?

Marafa: (Talking to journalists). He said he raised issues in National Mirror. Let him say the issues. I will respond to them here.

Wakili: You see, your experience has not helped you. It (Senate rules) says that where such a matter has been decided, you cannot raise it again.

Marafa: That is nonsense! The problem with Senate President is that he was unwilling to learn his job. In the four years he stayed there, he was absent most of the time.

Wakili: You are too personal. And this is not going to help you.
L

LMAO. Reads like a scene from a WOle Soyinka's play.