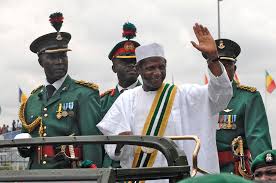 Though late Yar’Adua did not complete a single tenure, he left an indelible mark within the short period he presided over the affairs of the country.

Yar’Adua took over from former President Olusegun Obasanjo at the peak of the Niger-Delta crisis. The zone was a hotbed for criminal activities, especially the destruction of crude oil related installations concentrated in the region. This resulted to substantial human causalities and kidnap forcing multi-nationals to flee the region.

Unlike his predecessor who organised series of jamborees in the safe confines of Aso Rock where he hosted some leaders of the restless militants, Yar’Adua moved his Vice, Dr Goodluck Jonathan, and other Niger-Delta leaders to the creeks to meet with the militants and negotiate peace. The peace moves culminated in the amnesty programme which signalled the end of militancy in the rich oil producing region. The Yar’Adua administration confronted the problem headlong through the creation of a ministry dedicated to the region. Yar’Adua on June 25, 2009 came up with an unprecedented decision, proclaiming amnesty for all militants in the region. This proclamation and its subsequent acceptance by militant groups brought some measure of peace and stability.

The Yar’Adua administration confronted other security challenges facing the nation. Also, a 16-man Presidential Committee on the Reform of the Nigeria Police Force was set up on January 9, 2008. It was led by a former Inspector-General of Police, Muhammed Dikko. This was in line with the security component of the seven-point agenda.

At his inauguration, Yar’Adua regretted that “despite the transformation the country has undergone in the last half century, the police force has remained stuck in the past.”

To fulfil a major part of his campaign pledge, he also set up a Presidential Committee on Land Reform, under the chairmanship of Professor Akin Mabogunje.

Receiving the land reform committee’s interim report, former President Yar’Adua gave an assurance that his administration would implement their recommendations.

Another major achievement of the Yar’Adua administration was the decision to commence the dredging of the River Niger. This was after being on the drawing board for more than 40 years.

The project when completed would revolutionise transportation in the country and allow ships to carry heavy goods from the ports to the hinterland, thereby easing the pressure on the nation’s road network.

Another major area that the Yar’Adua administration tried to tackle was the power sector. He had promised during the campaigns to declare a state of emergency within the sector. It also embarked on the attainment of at least 6,000 megawatts of electricity by December 2009.

Perhaps, one area that late President Yar’Adua will be remembered in the annals of Nigeria’s democratic project is electoral reform. When he assumed office as president on May 29, 2007 at the Eagle Square, Abuja, before a tumultuous crowd of teeming Nigerians, he was humble enough to acknowledged that the electoral process that brought him into office was deeply flawed and promised in his inaugural speech entitled “The Challenge is Great; The Goal is Clear” that he was going to reform the electoral system.

On August 28, 2007, late Yar’Adua kept his promise to reform the electoral system when he inaugurated a 22-man Electoral Reform Panel led by Justice Muhammed Lawal Uwais, a former Chief Justice of Nigeria.

The Uwais-led panel at the end of its assignment submitted a comprehensive report which was tabled before the National Council of State. It received their approval, after which the Yar’Adua administration sent bills to the National Assembly based on the reform proposals, noting that the bill would address key challenges to the nation’s democracy.

The stage set by the late president led to various reforms in the electoral process which guided the conduct of one of the most credible general elections in 2011. Even within his party, the Peoples Democratic Party, PDP, Yar’Adua, as the leader of the party, insisted that electoral reform must begin within the then ruling party. The internal cleansing initiated by him drastically reduced the impunity that was hitherto associated with primaries and imposition of candidates.

Late Yar’Adua was born in Katsina Town, Katsina State, in 1951.

Between 1965-1969, he was at the Government College, Keffi, in present-day Nasarawa State for his secondary education.

He then moved to the famous Barewa College, Zaria, for his Higher School Certificate between 1970-1971. For his university education, former President Yar’Adua attended the Ahmadu Bello University, ABU, Zaria, from 1972-1975 where he obtained the Bachelor of Science Degree in Education/Chemistry. He returned to the same university from 1978-1980 for his Masters Degree in Analytical Chemistry.

Yar’Adua’s working career began at the Holy Child College, Lagos, for the mandatory one year National Youth Service Corps, NYSC, between 1975 and 1976.

He was a lecturer at the Katsina College of Arts, Science and Technology, Zaria, between 1976 and 1979. He moved to Katsina Polytechnic as a lecturer in 1979 and was there until 1983 when he left public service.

His movement to the private sector started at Sambo Farms in Funtua, Katsina State, as its pioneer General Manager between 1983-1989.

Yar’Adua’s foray into politics began as a lecturer when he became an active member and mobilizer for the defunct Peoples’ Redemption Party, PRP.

During the transition programme of former President Ibrahim Babangida, Yar’Adua was one of the foundation members of the Peoples’ Front, a political association under the leadership of his elder brother, the late Major-General Shehu Musa Yar’Adua.

That association later fused to form the Social Democratic Party, SDP. Yar’Adua was a member of the 1988 Constituent Assembly. He was a member of the party’s national caucus and the SDP State Secretary in Katsina. He contested the 1991 governorship election, but lost to the candidate of the National Republican Convention.

At the inception of General Abdulsalam Abubakar’s transition in 1998, he founded the K34 political association which later teamed up to form the Peoples Democratic Party, PDP. He contested and won election as Governor of Katsina State in 1999 and was re-elected in 2003.

Governor Yar’Adua is best remembered as the first governor to publicly declare his assets and promised to do the same again at the end of his tenure.

During his tenure as governor, the state went through an unprecedented development, culminating in profoundly transformation of the education and health institutions, provision of rural and urban roads, electrification, water supply and agriculture. Yar’Adua won the National Primary Education Productivity Merit Award in 2004 and the Central Bank of Nigeria’s Best Governor Award under the Agricultural Credit Guarantee Scheme, ACGS, in 2005.

He was happily married to Hajia Turai Umaru Yar’Adua, his first wife, who he married in 1975 and later to Hajiya Hauwa, whom he married in the 90s. He had nine children.

Until his death, the former chemistry teacher, who became Nigeria’s third democratically elected president, was also the first leader to take over power in a civilian-civilian hand over.