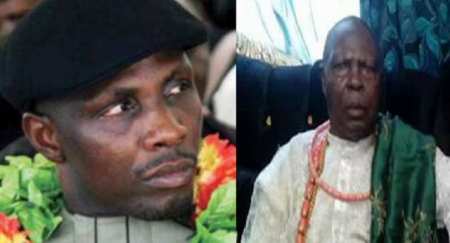 The burial began with the gates of Veenell Hospital shut as movements of persons were restricted; only select members of the Ekpemupolo family and traditional Chiefs from Gbaramatu Kingdom were allowed access into the premises due to the suspicion that the death of Late High Chief Thomas Osen Ekpemupolo may trigger tension within the area.

The bearing of the corpse of late High Chief Thomas Osen Ekpemupolo caused vehicular traffic in the town as some Itsekiri traditional dance groups entertained guests with songs and dance along the busy Okumagba Avenue Road in Warri.

The burial ceremony which begins today will continue after the remains of late High Chief Thomas Ekpemupolo has been interred in Kurutie with traditional dances at Oporoza Community from Saturday through Sunday.

L
Metro Tompolo Explodes, Vows to Make Soldiers Pay For The Death of His Father

Sep 7, 2016
ProfRem
P
K
Metro ‘Your Excellency, This May Be My Last…’ - Tompolo Writes Buhari Again