Curators
Members of the South-East Council of Traditional Rulers have called for the establishment of cattle ranches by private investors to curb incessant hostilities between herdsmen and their host communities. 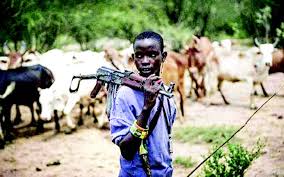 The Chairman of the council, Dr Eberechi Dick, made the call on Friday in Enugu when some traditional rulers in the zone paid a solidarity visit on Gov. Ifeanyi Ugwuanyi of Enugu State.

Dick said that the Federal Government would be doing a disservice to the unity of the nation if it dabbled into the creation of grazing reserves across the country.

The traditional ruler appealed to the Federal Government to urgently take necessary measures to disarm all herdsmen who were reported to be heavily armed.

“Herdsmen should not be allowed to carry arms apart from the traditional bows and arrows.

“On the rumoured grazing bill, our position is that cattle rearing is a private business and that government should not dabble into it as this will mean favouring one part of the country unduly.

“There should be cattle ranches established by private cattle owners where they are convenient to be established just as it is done all over the world,” he said.

Dick commended Enugu State Government for the mature and proactive measures it put in place to ensure the incident did not degenerate.