Politics What Exactly Is Wrong With President Mohammadu Buhari? [OPINION]

Seun Akioye, an Editor with The Nation has published a piece about President Mohammadu Buhari's persistent ear infection. He touched on the different types of ear infection and how can it be treated, and if the President's condition is capable of incapacitating him for a long time. 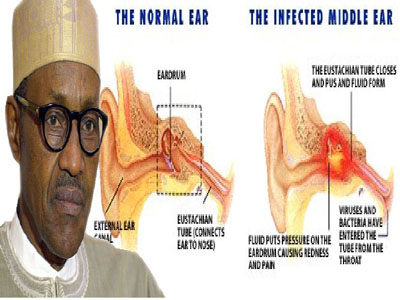 President Muhammadu Buhari yesterday left for London, United Kingdom (UK). While there for a 10-day holiday, he will see an Ear, Nose and Throat Specialist (ENT) specialist.

The President’s personal physician as well as a local ENT specialist, said his spokesman Femi Adesina, examined and treated him but recommended further evaluation “purely as a precaution”.

According to Dr. David Lowinger, an ENT Specialist Surgeon in Sydney, Australia, there are two main infections that can occur to the ear in an adult: Outer Ear Infection commonly called swimmer’s ear or otitis outer.

Lowinger describes it as a “painful condition caused by infection of the outer ear. While swimming, the polluted water gets trapped into the ear along with bacteria and other microorganisms and cause infection.” It is mostly common in adults.

The actual word used in the statement by the Presidency to describe Buhari’s infection is “persistent”. And is if the infection is persistent, it means it is frequent and causes pain. So, it may not be out of place to link the President’s ear infection to Otitis Media. But the assumption remains in the realm of a guesswork since it is uncommon to adult.

According to Mayo Clinic (www.mayoclinic.org), Otitis Media which can occur in adult is called Acute Otitis Media (AOM) which is “most often a bacterial or viral infection that affects the middle ear, the air-filled space behind the eardrum that contains the tiny vibrating bones of the ear.”

So, if the President is suffering from AOM, should Nigerians panic? What are the symptoms and possible treatment for this condition? Mayo clinic suggests the following symptoms: ear pain; drainage of fluid from the ear and diminished hearing.

Treatment for AOM is simple and involves mainly the use of antibiotics but in cases where the symptoms have persisted for more than 72 hours, a surgical operation might be required.

But could there be more to the ear infection? According to media speculations, what the President is suffering from is a condition known as Ménière’s disease. This disease, according to Wikipedia is a “disorder of the inner ear that usually affects both hearing and balance. It is characterised by episodes of vertigo and by fluctuating or permanent tinnitus and hearing loss.” It is an ear infection that shares symptoms with AOM but with more severe consequences.

Wikipedia describes more frightening scenarios: “The condition affects people differently. It can range in intensity from being a mild annoyance to a disabling disease. The condition is named after the French physician Prosper Ménière, who in a 1861 article, described the main symptoms and was the first to suggest a single disorder for all of the symptoms, in the combined organ of balance and hearing in the inner ear.

If Meniere is characterised by episodes of “vertigo and by fluctuating or permanent tinnitus” what are the definitions of these conditions? From Wikipedia, we learnt that “Vertigo is when a person feels as if they or the objects around them are moving when they are not. Often, it feels like a spinning or swaying movement. This may be associated with nausea, vomiting, sweating, or difficulties walking. It is typically worsened when the head is moved. Vertigo is the most common type of dizziness.”

Tinnitus is described as “hearing of sound when no external sound is present. While often described as a ringing, it may also sound like a clicking, hiss or roaring. Rarely, unclear voices or music are heard. The sound may be soft or loud, low pitched or high pitched and appear to be coming from one ear or both. Most of the time, it comes on gradually. In some people, the sound causes depression, anxiety or interferes with concentration.”

Could the President have been inflicted with the more severe Meniere? What are the possible treatment for this disease? Again Wikipedia says: “Several environmental and dietary changes are thought to reduce the frequency or severity of symptom outbreaks. It is believed that since high sodium intake causes water retention, a diet high in salt can lead to an increase (or at least prevent the decrease) of fluid within the inner ear, although the relationship between salt and the inner ear is not fully understood.

‘Thus, a low sodium diet is often prescribed, with sodium intake reduced to one to two grams of sodium per day (equivalent to approximately 2.5 to five grams of table salt, or a little more than one to two thirds of a teaspoon). By comparison, the recommended Upper Limit (UL) for sodium intake is 2.3 grams per day and most people are recommended to consume less than 1.5 grams.”

Getting adequate sleep and avoiding stress is helpful, but if the symptoms do not disappear with this treatment, a more serious procedure like surgery may be required.

Not a few local health personnel have kicked against the President’s decision to travel overseas at the expense of tax payers’ to treat “a simple ear infection.” But it may not be as plain as it seems, ENT specialists are highly skilled professionals who are usually referred to as otolaryngologists.

In the UK, where the President has gone for treatment, “entrance to otorhinolaryngology higher surgical training is highly competitive and involves a rigorous national selection process. The training consists of six years of higher surgical training after which trainees frequently undertake fellowships in an otorhinolaryngology sub-speciality, prior to becoming a consultant,” according to Wikipedia.

Here in Nigeria, otolaryngologists training take between five to seven years in medical school. Whether the President get treatment at home or overseas, he must heed medical experts’ counsel that ENT disease patients should avoid tobacco, stress and environment of loud noise.
--------
Source: The Nation. You can find the rest of the piece here