Chairman of the All Progressives Congress, Chief John Oyegun has said that Governor Ayodele Fayose of Ekiti state lacks credibility and people should disregard his statement on President Muhammadu Buhari's health.

Fayose had on Wednesday in a press statement released in Ado Ekiti that President Muhammadu Buhari is on life support and challenged any one with contrary opinion to produce the president in 48 hours. 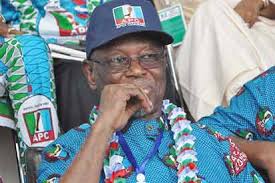 But Oyegun, while reacting to the statement said Nigerians should discount Fayose's statement.

He said: “That's governor of Ekiti state, when he talks, you just discount it.

On Buhari's health, the APC leader said: “We are not his doctor but report coming in are good.

“He has strongly recovered and it is good news.

May 14, 2020
Kenneth Chimaobi
K
K
Politics It will amount to self-deceit for anyone to say that President Muhammadu Buhari and APC do not mean well for South East – Stella Oduah – LIB

Politics Oyegun asks APC to get rid of godfathers – TheCable