He said this on Thursday while making his contribution to debate on the 2016 appropriation bill on the floor of the senate, Melaye said he was once blind, but he could now see.

Maintaining that the budget would serve the interest of Nigerians, he called on upper legislative chamber to pass it. “I thank President Muhammadu Buhari for giving us, for the first time in 17 years, a holy budget,” he said. 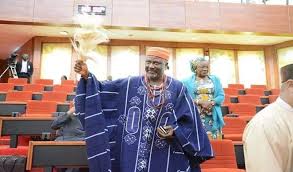 “And instead of repatriating our national patrimony for the purchase of stoves, he has given something to the youth. Let me say, that borrowing this time will be beneficial to the ‘talakawas’,the ‘mekunus’ and the palm-wine tappers in Umuleri.

“This administration is bringing back our long-lost reputation as a country.” The time to be born again is now. Once I was blind, but now I can see.”

Politics Senator Dino Melaye Lists Why He Is Qualified To Run For Ofice Of The Governor – Stella Dimoko Korkus.com

Politics Dino Melaye and Senator Adeleke All Smiles In The Senate – OluFamous.Com

P
Politics Must We Begin Every Year to Propose a Budget That is Not Realistic? Dino Melaye Queries 2018 Budget

Politics Why Jonathan Was A Better President Than Buhari – Dino Melaye – OluFamous.Com