A woman was caned in front of a crowd of people for being ‘too close’ to a man who she wasn’t married to, an offence in Indonesia under Sharia Law.

Nur Elita was forced to endure the punishment outside a mosque where hundreds of people gathered to watch her being caned.

She received five lashes and had to be taken to hospital following the punishment. 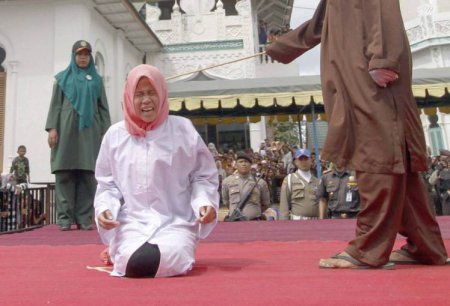 Nur had violated the region’s strict Sharia laws after she allegedly showed affection to a fellow university student.

Sharia Law states that men and women who are not married are not allowed to get close to eachother due to the ‘khalwat’ offence. They face public caning if they do.

Shame on phallic superiority! So, what happened to the man?

Jan 14, 2022
Kayode Israel
K
P
Metro How Woman Discovered She Had Been Married To A Dead Man For 6 Years

Mar 20, 2017
PressRoom
P
A
Metro A Day With The Gay Community By Reuben Abati

Dec 28, 2016
abujagirl
A
A
Entertainment Chimamanda Adichie :15 Ways To Raise a Feminist Daughter

Oct 13, 2016
abujagirl
A
L
Metro READ: The Story of Ex-OAU Student Who Transformed From Being a Man to a Woman