There was a mild drama at the Ibara Prisons, Abeokuta, on Wednesday, when a middle-aged woman, Fatima Balogun, was arrested by the operatives of the Nigerian Prisons for hiding a mobile phone wrapped in a cellophane inside a soup prepared for her boyfriend who was remanded in the Prison.

Tribune Online gathered that Balogun was arrested at the entrance into the Prison yard while attempting to smuggle the phone into the prison.

This development was described by the State Controller of Prisons, Mr Benson Abolade, as a threat to national security, saying the action was against Prison operations. 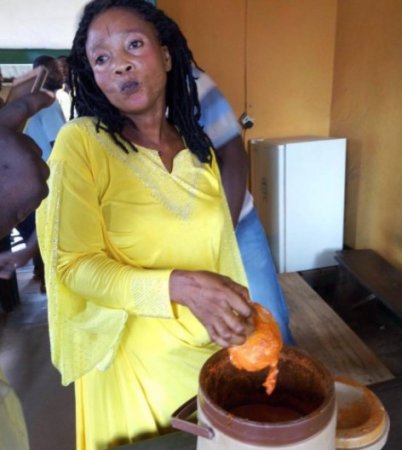 He mentioned sharp objects, drugs, weapons, handsets as some of the items prohibited in the Prisons.

The Prisons boss said the woman would be handed over to the Police for prosecution so as to serve as a deterrent to others.

“It is an offence to bring these articles to the yard without the permission of the Prisons officials.

“The Controller General frowns at such action because he knows that it impinges on the national security and that is why he gave a tall order that Special Intelligence Unit should be formed in all the Prisons formations nationwide,” Abolade said.

Balogun upon interrogation confessed to the crime that she indeed hid a phone inside a soup for her boyfriend identified as Ganiyu Ajibode who was remanded in the Prison for armed robbery.

The suspect said, “I hid the phone inside the stew because I know they will not allow me to take it to him in the Prison. I did not know it is bad. I wrapped it in a cellophane bag. We have been together for two years. I live with my father having been abandoned by my husband who left me with two children. I regretted my action and I plead for forgiveness.

Dec 20, 2021
ese
E
E
Metro Boma and I didn't have sex but it was wrong as a married woman to be kissing - Tega apologizes for her behaviour in the Big Brother Naija reality show

Oct 11, 2021
ese
E
C
Entertainment #BBNaija: I’ll admit it was difficult at first to accept that she has a boyfriend – Saga clarifies moments shared with Nini in the house – Information

Sep 28, 2021
Chinedu Iroka
C
E
Entertainment Boma and I didn't have sex but it was wrong as a married woman to be kissing - Tega apologizes for her behaviour in the Big Brother Naija reality show

Oct 11, 2021
ese
E
E
Metro Woman reveals she tried to commit suicide to frame her boyfriend for murder because he broke up with her - LIB