The Xenophobic attack on Nigerians in South Africa has been the subject of worry in the last month. The attack has led to loss of lives, destruction properties, and rendered many homeless. Also, businesses have been lost to mobs who accused them of taking their women and jobs. The Nigerian government has criticised the South African government’s handling of the attacks, but it has not said how it will help its citizens seek redress.

In a feature report by The Nation, Lawyers have identified options available to the victims.

Lawyers, including Femi Falana (SAN), Sebatine Hon (SAN) and Dr. Umar Abubakar, argued that the South African government, under the law, was under the obligation to safeguard the lives and property of all residents in the country.

They argued that it was wrong for South African government to look the other way while its citizens commit crimes against residents of other countries, to who it owed the obligation of protection.

The lawyers are of the view that remedies exist for victims of xenophobic attacks in courts, either in South Africa or outside it. 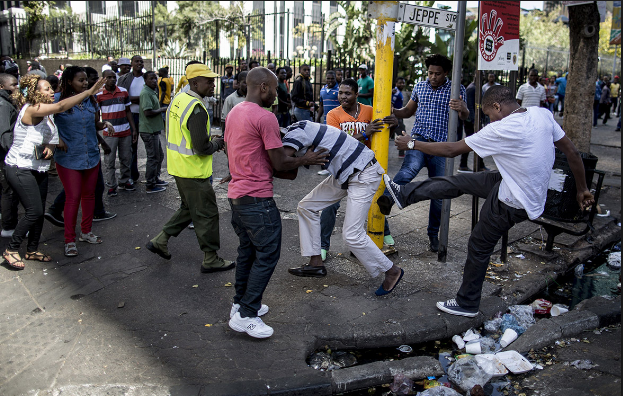 Falana, who threatened to sue the South African government should the attack persists, urged President Zuma, in a recent letter, to urgently identify suspected perpetrators of criminal acts and xenophobic attacks against Nigerians and other Africans living in South Africa and to bring them to justice promptly.

Falana argued that xenophobic attacks and violence are not only human rights violations, but also criminal acts, and the South African government’s persistent failure to proactively address the problems is a serious affront to the rule of law, and amounts to breaches its international human rights obligations under the African Charter on Human and Peoples’ Rights, particularly Article 12 on the right to movement.

Hon said the option for the victims is for the Federal Government tackle the issue diplomatically and request damages from the South African government, for the losses suffered by its citizens.

“If these options are rejected, the victims can come together and initiate a civil action or actions against the government of South Africa in that country. Such suit can even be initiated in courts here since South Africa has an embassy here.

“Those Nigerians, who are directly affected can sue the South African authorities. If they find it difficult to get local courts in that country to hear their case, they can approach courts outside the country for redress.

“Honestly, this xenophobia of a thing, is very terrible. It shows serious level of ingratitude on the part the South African government and its people to the contributions of other African countries, particularly, Nigeria to the successful dismantling of the inhuman and barbaric apartheid regime.

”The question to ask the South African leaders, who seem to be comfortable with this unwarranted attacks, is whether it is only the non-South African Africans that are criminals in that country,” Hon said.

Abubakar said the incident in South Africa and its concentration on fellow black Africans were a reflection of the failure of governance. He wondered how South African leaders and its people could forget so soon the sacrifices of other African countries, especially Nigeria, for their country’s independence from the brutal apartheid regime.

“From the trend of events and the reaction of the South African authorities, the xenophobic attacks on Nigerian and other nationals, it is clear that the South African government is complicit. It has failed in its international obligations to, among others, protects residents in that country.

“In the case of the Nigerian victims, I will advise the Nigerian government to sue for damages on behalf of its citizens, who have been subjected to these unwarranted losses. Should the government refuses to act, I will encourage the victims themselves to sue either in South Africa or Nigeria.”