Curators
A social group based in Southwest Nigera, Odua Defenders Union (ODU) has vowed to take the fight to the Niger Delta Avengers (NDA) should the militant group attack Lagos within a matter of days as it has threatened to do. 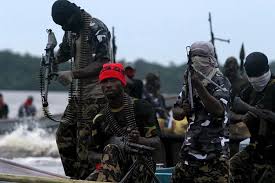 The group reacting to a threat by the rampaging militant group to launch attacks on installations in Lagos, Abuja, Port Harcourt and Calabar described the planned attacks on Lagos as an insult to the Yoruba race, Vanguard reports.

The ODU president general, Rabak Anthony, in a statement warned against the dangers ahead if Ijaw militants decided to carry out their threat to attack Lagos or any part of Yorubaland.

The group said: This threat that was published in all the media, both electronic and print, cannot be taken for granted. Therefore, the Yoruba are ready to make the first move against the Ijaws in Lagos before their ‘brothers’ will storm Lagos.

“We fought the Ijaws here in Lagos before because of this their arrogance and they know we are ready for them. They came here about five years ago also to attack the Atlas Cove where Naval officers guarding tank farms were killed.

“So, we are not taking this threat without preparation. We are ready, let them make the move.”

The ODU urged the security forces to go after the Niger Delta Avengers.

Curators
There is just too much money in militancy and tribalism. Let us not forget religion!