Curators
The Managing Director of Zenith Bank, Mr. Peter Amangbo, has denied that the bank sponsored the governorship campaign of Fayose in 2014, contrary to the governor’s claim. 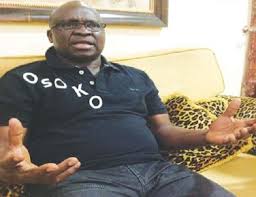 Amangbo told the EFCC that the bank had only one branch in Ekiti State, wondering why the bank would invest in Fayose when the state government had no account with the bank.

Fayose had claimed that his campaign was funded by the bank and a few private individuals.

The bank MD said at no time did he hold a meeting with Fayose and his friend, Agbele.

A source at the EFCC stated that Amangbo said at no time did he meet with Abiodun Agbele or any representative of Fayose. He said the allegation that the bank funded the Ekiti State governorship election was false.

“He further stated that at no time did Fayose and the chairman of the bank, Mr. Jim Ovia, and himself hold a meeting.

“He said the bank, as a matter of policy, did not sponsor political groups or elections.”

This is coming a bit late. Zenith bank should've spoken out earlier. In more dynamic economies, Zenith bank's stocks would've plummeted like the walls of Jericho.

Politics Fayose vs EFCC: What happened in court on Friday – Daily Post Nigeria