Curators
There was a mild drama in Pallam Village of Madagali Local Government Area of Adamawa on Friday when a newly sunk borehole failed to pump water during its formal inauguration by the state Commissioner for Water Resources. 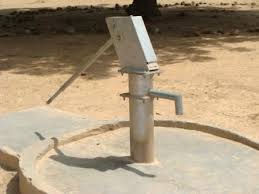 The Commissioner, Mr Julius Kadala, who represented the state governor at the occasion, was shocked and embarrassed when water failed to flow from the hand pump after several minutes of pumping by him.

Dignitaries, including members of the state House of Assembly and traditional rulers, looked visibly embarrassed by the incident.

The water project was initiated and sponsored by United States based non- governmental organization ” Zumunta Association, Washington DC chapter” for Pallam community, which is among areas recovered from Boko Haram insurgents.

” This is embarrassing and unfortunate; I want to draw the attention of Zumunta Association that this borehole it donated is not functional,” Kadala said.

He directed that the contractor that handled the project, be invited to tackle the problem.

Also speaking, Mr. Yusuf Muhammed, Chairman of Madagali Local Government Council, expressed displeasure, adding that if the council had been involved in the project, it would have ensured that the right thing was done.

Responding on behalf of the organization , Mr. Hazial Haniel , the supervisor of the project, said that he was not ruling out the possibility of act of sabotage.

” I am highly surprised about this development as this morning before your arrival, I took bath with water from the pump,” Haniel said.

He said that he would send a situation report to the initiator for necessary action.
P

Senseless. This borehole itself will compound problems for citizens. Is this what the governor/commissioner uses in his home?