Politics America Is Behind Us, We Will Win War Against Corruption – President Buhari

President Muhammadu Buhari has reassured that the ongoing anti-corruption campaign in Nigeria will be won with the support of the United States and goodwill of people..

A statement released on Thursday in Abuja by Mr Femi Adesina, the President’s Special Adviser on Media and Publicity, said Buhari gave the assurance at a meeting with the American Secretary of State, John Kerry, on Wednesday.

The meeting was on the margin of the conference on climate change, COP22, in Marrakech, Morocco.

President Buhari said corrupt people had accumulated a formidable arsenal of illicit wealth, which they were now deploying against the government on diverse fronts.

"But it is a war we are determined to win, and which we will win," President Buhari said. "People of goodwill are behind us, countries like America and many others are with us, and we will surely win." 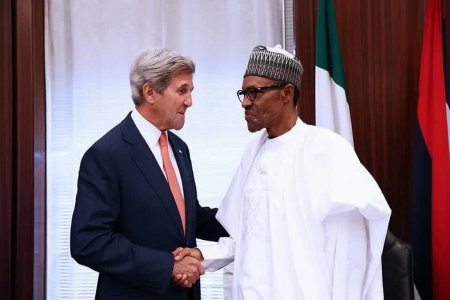 The President also updated Secretary Kerry on the war against insurgency in the North-east of Nigeria, efforts being made to tackle humanitarian problems caused by the insurgency, informing that a presidential committee had been launched "under Gen T.Y Danjuma, a man of high integrity."

The President said Nigeria was happy with American support on different fronts, assuring that the economic challenges facing the country were being "frontally tackled, and we will overcome them soon."

Secretary Kerry expressed delight at the many successes of the Buhari administration, pledging continued U.S support in the bid to overcome security, humanitarian, political, and economic challenges.
As the Barrack Obama administration exits next January, Kerry said he would love to continue engaging with Nigeria, even in a private capacity. He described President Buhari as a strong international partner in the battle against violent extremism.

Politics Buhari to U.S. Ambassador: ‘I sit here with a clear conscience, honouring my oath of office’ – Pulse Nigeria