As Nigeria’s Senate President, Bukola Saraki faces his substantive trial at the Code of Conduct Tribunal, CCT, on Tuesday, his lead Counsel and former Minister of Justice, Chief Kanu Agabi was surprisingly absent.

Confirming Kanu Agabi’s absence, a lawyer among his team said he would be unavoidable absent at the day’s hearing, though another senior lawyer, Barrister Mahmood Magaji SAN was present. 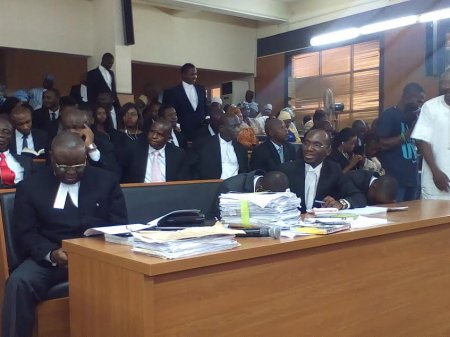 Consequently, the Prosecuting counsel sought immediate commencement of substantive trial so as not to foot-drag the matter that had been delayed in the last six months over what he termed frivolous motions and counter motions.

But in his submission, Agabi's representative pleaded that the matter be fixed for hearing at a later date.

Meanwhile, the Senate President and few other senators arrived the Court at exactly 9:55 am.