Curators
The Economic and Financial Crimes Commission (EFCC) yesterday opened its case against a cousin to former president Goodluck Jonathan, Azibaola Roberts, with revelations of how the ex-National Security Adviser (NSA), Col. Sambo Dasuki instructed the payment of $40million in favour of his company, One Plus Holdings. 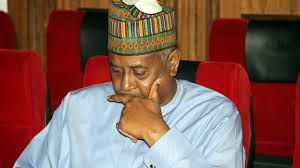 The anti-graft agency made the disclosure through its first prosecution witness (PW1), Ibrahim Maye.

Roberts with his wife Stella, were on June 8, 2016 arraigned on a seven-count charge bordering on money laundering to the tune of about $40 million.

The witness is a retired Permanent Secretary, Special Service Office, a department in the office of the Secretary to the Government of the Federation.

Maye told the court that Dasuki had endorsed a memo to him with details of the company’s account.

“On August 20, 2014, the NSA endorsed a memo to me which originated from the director of finance and administration in the Office of the NSA giving bank details of a company called One Plus.

“The memo also gave details of the purpose for which the company was to be paid the sum of $40 million.

“The NSA instructed me to prepare payment and my understanding of that was that I should prepare the payment mandate for One Plus for his signature.

“After I got the memo, I prepared the payment mandate, sent it to him, he signed and sent it back to me.

“The subsequent necessary action was for me to counter sign, which I did and I sent it to the CBN for payment,” Maye said.

Justice Nnamdi Dimgba adjourned the case to July 4 and 5 for continuation of trial.‎