Maria Ude Nwachi, a member of the Ebonyi state House of Assembly has written a long piece to Linda Ikeji on what she must do if she truly desires to get married. 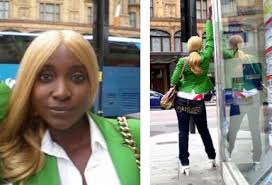 Linda, you cannot have it both ways.

I personally did a lot of damage control for Linda Ikeji when it was alleged she said; she can buy any man with her money. I sincerely did not believe she can utter such; as I could not imagine any reasonable human being saying such. I defended her with all my might. I Paid Facebook and Google to boost and promote the article I took my time to create, image-making style, in order to squash that allegation. Remember, I do not know her in any shape. Never met her. Never spoken with her. I know her the same way millions do, via the fact that she is famous blogger. I Just did it from my heart; for I see her as a role model to women and youths. And I did not want such dent on her image.

Recently, power-blogger, Linda Ikeji, told an interviewer that she can never marry a poor man. Hear her: "No, I can’t marry a poor guy and I’m being honest about it. He doesn’t have to be rich but let him be successful in his own way. When I was 30, my standards were extremely high. Now, I have only three criteria. He must be successful. He must be a good man in the sense that he has to be very supportive of what I do. If he tries to stifle me, I’m out. The third one, is the one that likes to eat groceries well (laughs)."n

On her latest statement, I do not agree with her at all. Firstly; a rich man is nothing but a poor man with money. And; no condition in life is ever permanent.

The scariest thing for a man to hear is not even the one of her saying she can't marry a poor man, it is the one she says that she would be out if a man tries to stifle her. Then she better just create the man from scratch. Because there is no man, especially African man, that will not attempt to stifle his wife every now and then. That innocuous utterance has already sent strong signals to those successful men she is seeking that they better go and marry someone that will not attempt to wear the trouser at home with them; and not her. It also indicates to those successful men she wants that she will never be submissive in anyway to them; that she no send and is ready for a divorce at any given time. She is basically preempting divorce even before marriage.

The major reason men, especially African men are working hard to be successful is so they can get that woman they want, that will give them a peaceful home, and the leeway to be the oga of the house. Why would a man go through it all to make it only to marry a woman who is going to become the man of the house with him.

Important: A man is a man, poor or rich. No man with his head in intact, will be okay for a woman to control him. Even if the woman is richer than money itself. It will not happen. Even the poorest man on earth would rather be eating his Indomie in peace than to be controlled by any woman. This applies even in the civilized world. This not about pride, this is human nature.

On money: Being rich, poor or broke is not a permanent state of being. Moreover; money is not the be all and end all of life. Some people are very rich today not just by hard work but by force of universe which can also be interpreted as grace. Let us not dismiss people based on their current condition. Moreover, he only thing constant in life is change.

Hear Linda, "I keep telling people. It’s not that men are scarce. They are not scarce. The type of men that some of us are looking for are scarce. If I want to get married next week, I can. I want a man that I can look up to. Somebody that inspires me, somebody that will push me, motivate me; somebody who has had some success in his own career. I’m inspired by successful people. I can’t wait to meet someone like Tyler Perry."

Now let us talk about the definition of success. According to her, she wants to marry a successful man, but the man does not have to be rich. This is a huge oxymoron (an epigrammatic effect, by which contradictory terms are used in conjunction). Success is defined as;
the accomplishment of an aim or purpose. And it does not take a genius to understand that by successful, she means a wealthy man. A man of means. Going by the example she gives as her kind of man, Tyler Perry, she has dropped all the hint any one needs to know concerning her idea of a successful man. Perry is an ultra-rich American actor, comedian, producer, director, screenwriter, playwright, author, and songwriter.

The problem i see with Linda is that she is often too open about her feelings. I will advise that in her search for a man that she should keep some of her criterias private. This is not America, this is not oyibo land where women can say and do anything with minimal or no consequence. Emotional intelligence is knowing your environment and adapting to it; especially when it comes to utterances, actions etc. It is not everything the heart conceives that must be uttered publicly.

Dear Linda, you can't have it both ways. You can't eat your cake and have it too. Being a very successful woman in Nigeria, you must be willing to compromise when it comes to relationships with the opposite sex. You might not be a girl, due to your high level, a man can tell what to do or what not to do, but you must not say such out loud, you must give vibes that you can be told what to do by your man, you must do your best to show them the utmost respect, the most respect you can muster to give them. You are going to have to eat humble pies for your man many a times. And it is okay my darling, it will take nothing away from you. Let the man to feel he is in control. You must try and do that. It is not an option, it is necessary.

By your success alone, you have made many men feel a bit less manly, and so to even rub it in by reading them riot acts to them, is an overkill. Humility is a natural gift, those who are humble by nature will remain humble even if they become the richest on earth. But humility can be learned too, in dealing with the opposite sex you will need a mighty doze of humility, nnem, learn it if by force biko. Always remember that a man is a man is man is a man. Respect matter to a man; no matter his status and class. Linda, in the end you will have the last laugh, when you are running around with your cute kids doing one or two things and your hubby by your side. When you are compromising and eating them humble pies, think of your family (your own kid/s and man) and it will all be worth it.

By virtue of you being a very successful woman, African woman for that matter, no matter who you marry, it is not going to be easy. But if you do your math properly, do some adjustments and amendments, you won't have any regrets. Life as we know it is not a bed of roses for anyone, if you have this, you might not have that, so it's all about compromise and middle-ground.

You are a very public figure. Your public utterances must be guided. By virtue of your rag to riches success story; you have become an involuntary role model to many; including me. You are intelligent but you need to take a class on emotional intelligence. Be very mindful of your public statements please. I wish you more success in life. Thank you.

Madam what is your business... anyway maybe Linda has Daddy issues and maybe she doesn't. It is her life

Thank you very much Maria for your advise, our people say those that have ears let them hear. @maria you really mean well for Linda, she talk too much. If you check some of my comments in Linda media uploads, you will see my kind deeds advise to her.

K
Entertainment You can't be living with a married man in Dubai and still have the guts to call his wife in Nigeria to threaten her – Actress Iheme Nancy calls...

Oct 25, 2021
Kayode Israel
K
K
Entertainment “I can’t believe I’m this loved” Yul Edochie’s second wife says as she tells her followers that “it takes two to tango” and she’s wondering whether...

May 3, 2022
Kayode Israel
K
K
Entertainment Update: Kazim Adeoti denies first wife’s claim that she built the home he resides with actress Mercy Aigbe, says she forced him to marry a second...

May 10, 2022
Kayode Israel
K
K
Metro “Lagos will drive you mad” Man concludes after his wife parked her car to drop the kids at school only to find it in the gutter when she returned....

Mar 22, 2022
Kayode Israel
K
K
Entertainment “Now I know the meaning of for better and for worse”- Janemena writes as she shares video from the night her husband proposed to her – LIB