Curators
Former Super Eagles Captain, Vincent Enyeama has extended his contract at Lille for a further two years, the French side revealed on it’s website. 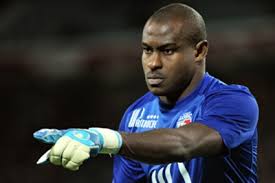 The previous contract for the former Enyimba shot stopper was supposed to run out in the summer of 2017 but the latest extension will keep Enyeama at the club until 2019.

Enyeama kept 20 clean sheets in 39 games in all competitions for Lille which earned him a place in the Ligue 1 team of the season and the club revealed their delight he penned a new deal.

“LOSC is pleased and proud to announce the extension of Vincent Enyeama contract for two more seasons.

”The Nigerian goalkeeper of 33 years will continue to defend the goal for LOSC until 2019,” the club announced on their website.