The governor who spoke on Monday while inaugurating newly-elected local council chairmen at the in Ado Ekiti said : “The very day that Federal Government attempts to engage me by any standard, that government will begin to crumble, Guardian reports.

My people wanted me as governor and I am back. I’m the most senior governor in Nigeria. When people wanted to fight God they forgot that Moses was an instrument in the hand of God.

Fayose said it was obvious that President Muhammadu Buhari had “no clue to solving the economic crisis facing the country and that is why I suggested that Prof Yemi Osinbajo should take over”.
M

Lol. This happens when you have a confirmed tout and thug as a governor. Fellow should face his executive duties and leave the FG alone. His people have not collected Christmas rice. 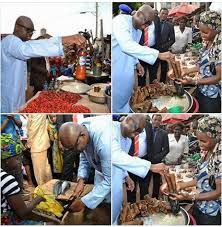 M
Politics Fayose: Buhari will lose if 2019 election is free and fair - The Cable News