Business Fidelity Bank Reacts to the Arrest of MD, Nwankwo Over Diezani's Transactions

The management of Fidelity Bank Plc says no law was broken in the transactions for which the managing director, Nnamdi Nwankwo, is being quizzed by the Economic and Financial Crimes Commission (EFCC).

It was widely reported on Thursday that Nwankwo and Martins Izuogbe, the bank’s head of operations, are being held by the anti-graft agency for allegedly receiving $115 million from a former minister of petroleum resources, Diezani Alison-Madueke.

However, the bank has maintaining that the transactions were “duly” reported as required by regulators. 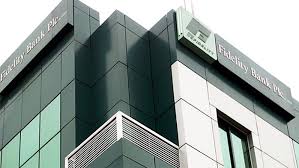 “Our attention has been drawn to reports in the media on investigations into transactions undertaken by the Bank in the normal course of business in 2015.

“The transactions are now the subject matter of investigations by the Economic & Financial Crimes Commission (EFCC).

“We can confirm that the transactions were duly reported as required by the regulators and the Bank is cooperating fully with the authorities on the investigation.

“We assure our numerous stakeholders, including our customers that we are working assiduously towards a quick resolution of the issues.”