Veteran juju artiste, King Sunny Ade has debunked rumours making the rounds that he has passed on. 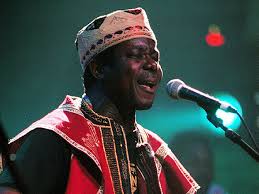 It would be recalled that the social media went agog earlier this week when news filtered in that he gave up the ghost after an undisclosed ailment.

The ‘Sunny Ti De’ crooner, in a chat with Punch, refuted the rumour, stating that he was in good health.

He denied being ill or being admitted to the hospital, saying he wouldn’t know why anyone would go to town with the news that he had passed on.

The music legend fondly called KSA said, “If I were in a hospital, I would say so. There wouldn’t have been any reason for me to lie. In fact, the hospital would also see me as a liar if I lied that I wasn’t admitted or sick. But the truth is that I have not been sick. I am hale and hearty.

“I don’t know where the story is coming from or who could have thought of going to town with such rumours.

“Don’t mind them. But they can’t kill me. God will not allow anything to happen to me. I performed at Tunji Braithwaite’s burial on Saturday night and I wasn’t ill. I am just coming from Oba Awujale’s palace in Ijebu Ode as you are talking to me. I am very healthy.

“I am not on Facebook, so I didn’t even read the story. It was friends that called me to tell me about what they read. I still pray for those who started the rumour.

“I don’t look for enemies and I don’t have any enemy,” he noted.

E
Metro David is 25-years-old. I am aware that he travelled but he told me he was going to school abroad - Brother of boy taken to UK by the Ekweremadus speak